What happened at Grafton Street?

On Saturday 27th February 2021, thousands gathered in Dublin to protest against the authoritarian regime they have been forced to live under for 12 months. A few protesters had a different idea of how the day should go. 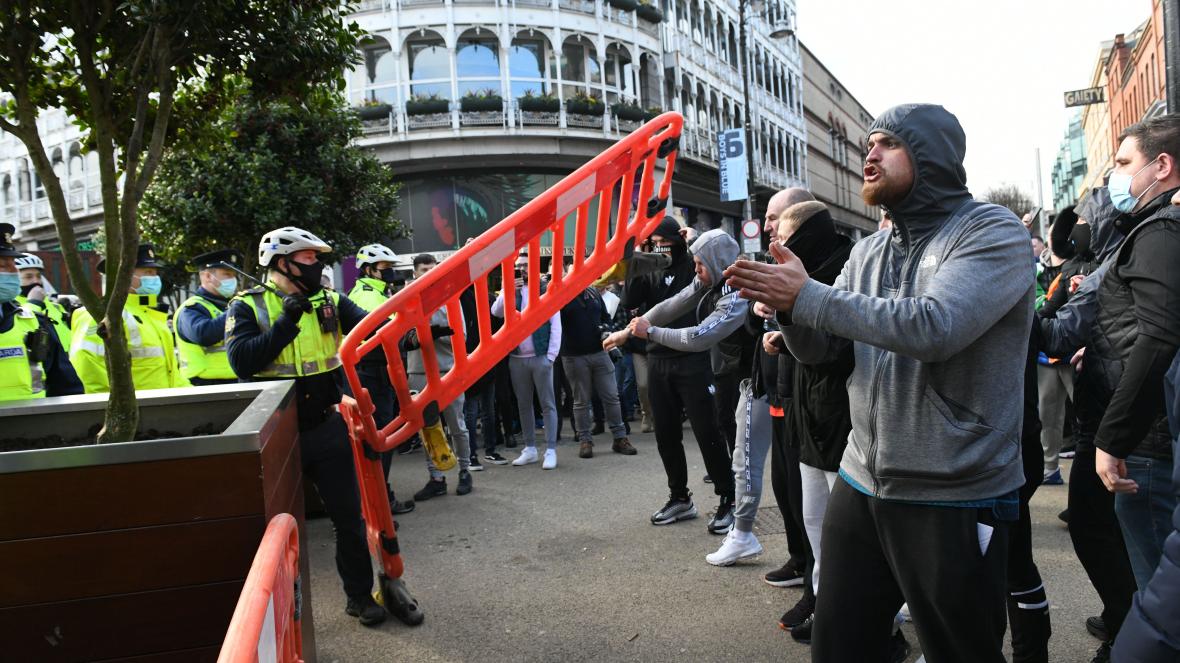 On Saturday the 27th February, we were contacted by one of our longest “followers” on Twitter seeking help in facially identifying the person who has now become known as the “Rocketman”.

A grainy video surfaced online showing a man wearing a creamy/white coloured hoodie shooting fireworks straight into the faces of Garda. In doing so this person unintentionally injured a member of the public who mattered to this “follower” in question. We agreed we would take a look and if we could identify the person, and we deemed it appropriate, we would help out. Everything has a context and we needed to firstly ascertain what that context was in this instance.

It soon became clear that “Rocketman” spent a lot of his time trying to antagonise police and wind up the crowd in an attempt to instigate violent clashes. So with the context established, we agreed to help. During the process, we would also identify another person who too was trying his best to get some violence started. At one stage he would chase after and kick a Garda before fleeing into the crowd, but not before we spotted his antics.

We have also been contacted by several people telling us they believe these men to be everything from “far-right extremists” to “far-left activists” to “Garda agent-provocateurs”. We cannot comment on any of these allegations because we simply don’t know and therefore it is outside the remit of this investigation.

Below we will lay out how we established the identities of the “Rocketman” and the “CopKicker”.

This is where it began for us. This video was posted to Twitter showing a guy in a creamy coloured hoodie with a firework in his hand that was being lit by a young boy. The man would then go on to fire the rockets at the Garda.

Oddly, our focus was immediately drawn to another person in the crowd and away from “Rocketman”, but we’ll come back to that. The next step was to gather all the footage we could get off the day and begin to sift through it. We quickly found footage of someone resembling the “Rocketman” in terms of dress code. Blue jeans, creamy/white coloured hoodie and dark shoes.

Here is the video the stills are taken from.

At this stage, there wasn’t enough to conclude that the bottle-thrower was the “Rocketman”, but we had a line of enquiry to follow now and also had a good facial image to work with.

Then we were sent this picture on Twitter that was taken from a much longer YouTube video that we’ve since analysed.

There are some solid similarities now starting to present themselves.

After verifying minute details, that we won’t go into here, we felt there was now enough evidence for us to conclude, confidently, these two images were of the same person. But OK, we found someone who lobbed a bottle at the cops, but was he the “Rocketman”?

Here he is from behind, lighting the fireworks. Black shoes, blue jeans, a black t-shirt, white hoodie.

There are many other similarities but we feel the evidence provided is strong enough for this article. (Should any further analytical details be required, they can be provided on request.)

As previously mentioned. When we first viewed the rocket attack video we were drawn to someone else rather than the “Rocketman” himself, and it was this guy.

What made him stand out initially is that he looked similarly dressed to the person who lit the firework, whom we now know to have been a kid thus a different person.

But before we had worked out they were different people, we decided to watch and track his movements. He would soon go on to chase down and kick a Garda.

The person in question is the guy in a grey hoodie, black Adidas bomber jacket and white trainers, to the right of “Rocketman”.

After the rockets were fired he goes out of shot for a few seconds before returning as he waits for the cops to run past.

When they do, he re-enters the frame, chases after the cop in the green box and kicks him.

Here’s the video of the incident slowed down.

He then runs back into the crowd on the left and disappears.

We would soon come across this same person in other footage trying his best to use the occasion to start a conflict with the cops. We will show two others.

As the guy on the microphone shouts “Blessed are the peace-makers” the cop kicker runs straight up to Garda lines and hurls a plastic barrier at them.

Not content at the lack of reaction, he then goes on to throw a bottle towards them.

Here we have a close-up. Note “Rocketman” to his left trying to fire up the crowd.

Our reason for writing this article is simple. Many thousands of people took the streets of Dublin yesterday to make known their frustrations and anger at having their freedoms removed and being locked up at home for the best part of a year. Their protest was authentic and justified and we fully support it, and them, 100%.

The establishment looks for any reason to discredit such protests and indeed they used these trouble-makers to try and discredit the many thousands of genuine people fed up with having their freedoms revoked. The actions of these thugs afforded the establishment and their media the excuse to paint all the protesters as trouble-makers. We couldn’t allow this to happen and indeed we didn’t. When contacted by the authorities in the South we made our position clear from the outset. If there were no prosecutions, we would reveal our communications.

Note how the thugs stole the show, above? This plays right into the hands of the establishment and its media and this allowed said establishment media to ignore footage such as this…

What imagery do you think the media ran with? The corporate media love anger, rage, hurt, sorry and pain. Like vultures, they feed of it. It’s their lifeline. They hate happiness, positivity, love and togetherness. Give them any excuse at all, no matter how small, and they’ll be delighted to turn a well-intentioned gathering into a story about ‘conspiracy theorists’ and ‘far-right extremists’.

Whilst we appreciate there is a lot of anger in societies throughout the world and we don’t doubt for a second the Garda have themselves been heavy-handed on occasions (we are not attempting to apologise for them) what you don’t do is use an important occasion, with families and kids in attendance, to tease them into responding with force. That is what they want you to do for the reasons outlined above; such scenes will distract from the message of the day.

We too are very frustrated with what’s going on. We see the measures being put in place as huge overreactions by politicians that have been scared into submission by radical scientists who have their own agendas. We sympathise with everyone who has, and is, suffering because of the totalitarian regimes we are living under. We’ve spent the past year fighting for restrictions to be lifted, fighting in defence of the kids and elderly and trying to hold power to account in Northern Ireland. The one thing they’d love us to do; the one thing that would destroy all that hard work would be for us to resort to violence at a protest.

Don’t play into the hands of the establishment at this time. They hate peaceful protests. They want a reason to paint such protests as ‘small, fringe groups of radicals’. What happened at Grafton Street yesterday was deplorable, dangerous, and overshadowed the efforts of the thousands of men, women and children that took to the streets to say, “Enough. Give us our lives back.”

To the rioters we say this – ‘We feel your anger and your frustrations. But redirect those energies to get your message out in a productive manner’.

The actions of the two men in this article are not reflective of the overall pro-freedom movement. The movement they let down so badly yesterday. Behind these two men were others whom we have also identified. This was planned and choreographed. We can confirm that appropriate action was taken by the authorities and we are happy our conditions for cooperation were met.

On the 21st October, 2020, at a time when Robin Swann’s health service was operating as a ‘Covid only service’, Conor Spackman of BBCNI Spotlight investigated the cost of ignoring cancer patients in favour of Covid patients. In this now…
END_OF_DOCUMENT_TOKEN_TO_BE_REPLACED

Gavin Yamey was caught deliberately and intentionally misrepresenting an article written by Professor Martin Kulldorff of the Great Barrington Declaration group. When we challenged Yamey on this he proceeded to spend the next 36 hours tweeting lie after lie about us whilst urging his 35K followers to report us to Twitter.
END_OF_DOCUMENT_TOKEN_TO_BE_REPLACED

The BBC in Northern Ireland have long acted as a PR machine for the Department of Health in their COVID-19 messaging. That messaging has mostly been little more than scaremongering and coercive in nature. In this report we look at how the BBC-NI helped propagate lies from a Doctor without verifying the doctor's claims or attaching a disclaimer to their broadcasts. After abandoning our complaints we were forced to circumvent them and go directly to the ECU who ruled in our favour.
END_OF_DOCUMENT_TOKEN_TO_BE_REPLACED

NI CMO Michael McBride is scolded by the General Medical Council (GMC) in the UK for his comments on the BBC.
END_OF_DOCUMENT_TOKEN_TO_BE_REPLACED

It’s been 2 years since Robin Swann took over as Health Minister in Northern Ireland and on this anniversary, we thought we would make available the now infamous, but deleted, BBC Spotlight programme with Conor Spackman wherein a leaked document…
END_OF_DOCUMENT_TOKEN_TO_BE_REPLACED