2021 was celebrated in the UK with an interview on the BBC of Laura Duffell, a Matron from Kings College Hospital in London. Laura would claim that “we have a whole ward of children here .” Being sceptical of the claim I submitted a FOI request to the Trust seeking confirmation. 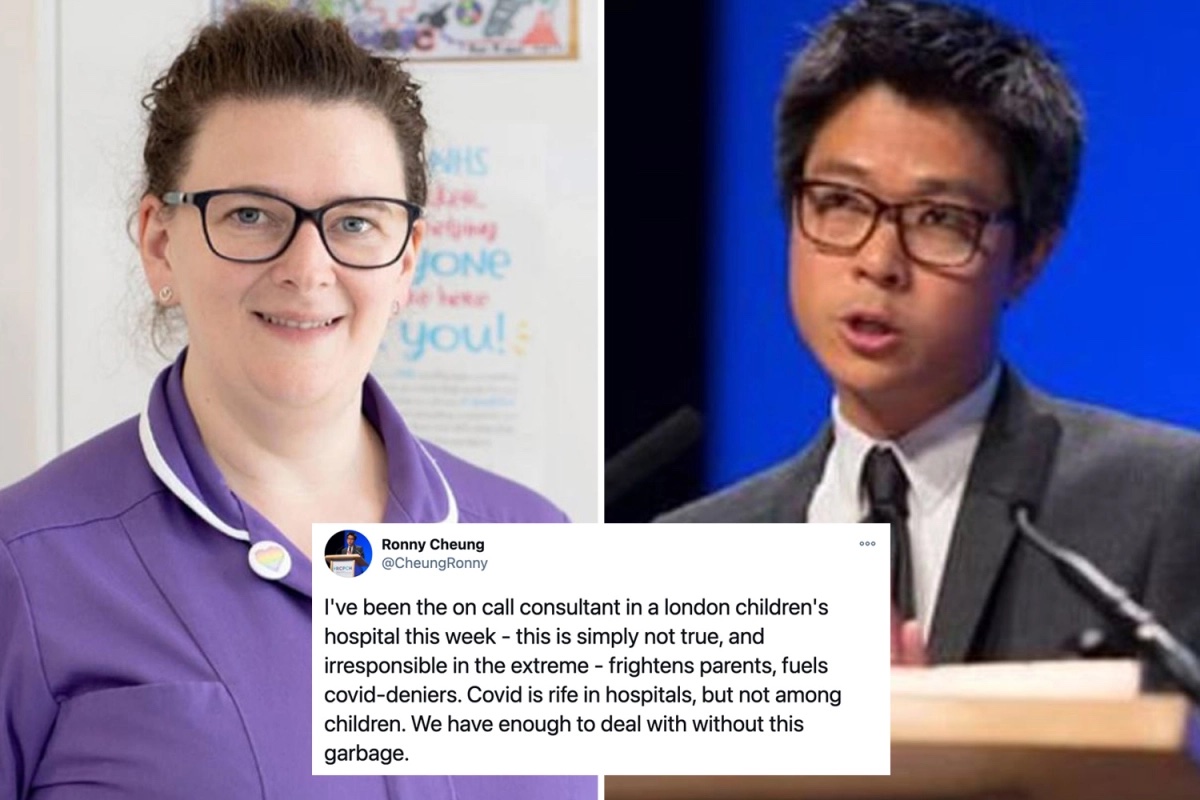 January the 1st 2021 was not a good time for the people of the UK or Ireland. We had entered into yet another lockdown, in the midst of winter with little hope of a reprieve in sight. During this time the news broadcasts were continuously pumping out stories of doom and gloom with daily Covid counts of deaths and new “cases”.

Parents had the added concern about trying to get their kids back to school in the hope to shield them from the craziness of adult hysteria. Craziness that some adult “experts” had taken to a whole new level with the likes of Dr Zoe Hyde, a vocal advocate of the Asian model for schools (as seen below), wherein kids are segregated even whilst eating. At the time Zoe wanted all school children to wear face masks and shields as well as being “shielded” behind perspex screens in the canteen and class.

So whilst parents were fighting to get their kids back to school there was a concerted campaign by advocates of the “Zero Covid” cabal, a group of “experts” fixated on the idea that not a single case of Covid, anywhere, was acceptable. This group launched a global campaign directed at children with the underlying aim of keeping schools closed until their objective had been reached. In light of the pushback to their radical ideology, they insisted that if schools are opened that kids be treated like little virus banks who have the potential to ‘kill granny’. Zoe is an influential actor in this cult and a rather dangerous one, as you’ll see next when she calls for the children to endure “anal swab testing” to be sure they are ultra-safe in class.

So it was in this atmosphere of fear, dread and desperation that parents would have to endure further scaremongering with what was to come next. To bring in the New year the BBC would interview a Matron of Kings College Hospital in London, Laura Duffell, for a Radio 5 Live interview.

Laura is cited by MSN as being a vocal campaigner for nurses. She also appeared on Good Morning Britain in 2020 over the issue of hospital parking charges for nurses.

However, during her Radio 5 interview with Adrian Chiles, she made a claim that took people’s fears to all-new heightened levels. She claimed that ‘wards were filling with children due to Covid.’ At her own hospital, she claimed there was “a whole ward of children” whilst also saying colleagues told her they also had “whole wards of children with Covid.”

“We have children who are coming in, it was minimally affecting children in the first wave, we have a whole ward of children here. I know that some of my colleagues are in the same position, where they have whole wards of children with Covid.”

The following day Ronny Cheung, a paediatrician who claimed that he was “the on call consultant in a London children’s hospital [that] week” took to Twitter to deny Laura’s claims.

However, he would go on to state that he ‘does not think Laura is lying.’

Whilst the media didn’t waste time in ensuring the claim got maximum publicity.

Not to be outdone social media went into overdrive with the hysterical seemingly seeking refuge under the bed whilst the sceptics, like me, suspected her claim to have been a part of this misinformation campaign to fuel the scaremongering around schools reopening and towards children in general.

I realised that we weren’t going to get to the truth of the matter on social media, so I reached out to the King’s College Hospital with a Freedom of Information request seeking clarification of the number of children they had as inpatients, with Covid, at that time.

On the 1st January I emailed the hospital and asked them the following:

Could you tell me how many children you are currently treating for SARS-CoV-2 in your hospital? By children I am referring to those under the age of 18. If I could also have a breakdown of that number into age brackets too?

On the 24th January the Trust responded.

So a total of 6 children under the age of 18 were in the hospital with a positive PCR test result “As at 12/01/2021”. But that didn’t tell me much for if the ward had 6 beds, and these 6 children shared the ward, then that ward would be full and thus validate what Duffell had claimed. If she was right then it needed confirmed and I needed to apologise to her. I, therefore, followed-up on my initial request by asking the following (I supply my questions in order with the answers):

Many thanks for your response.

Could I ask a follow-up question? Would these 6 children have been on the same ward?

3 of the patients were on the same ward, the other 3 were all on different wards.

Laura Duffell, who is a Matron at Kings College Hospital, said on the BBC on 1/1/21 that there was “a whole ward of children [with COVID19]” at the hospital.

Can you confirm if this claim is true and if so how many children exactly were on the ward that would make it “full”?

To manage predicted demand generated by the second wave of COVID-19, the Trust converted one 12 bed paediatric ward into a COVID-19 only ward.

On 2 January 2021, there were two children at the Trust who were on this ward.

You will recall that the numbers the Trust gave me previously that showed 6 children in hospital were correct as of “12/01/21” but Laura’s interview on the BBC was on the 1st January. The correct information on the 1st of January according to the Trust’s response to my FOI was there were 2 PCR positive children in their hospital on a ward with a capacity for twelve beds.

My suspicions had been vindicated. Laura Duffell lied on the BBC. In the same way that Professor Trish Greenhalgh misinformed the British public on Good Morning Britain and the same way that the Financial Times’ John Burn-Murdoch took to Twitter to misinform his followers, in the same way, that Dr Julia Simons also took to Twitter to misinform her followers regarding the current staffing levels at her hospital. Each of these instances I exposed and wrote about.

I say “lied” rather than misinform in the case of Laura Duffell because it is nothing other than a lie to say there was a full ward of children with Covid when in fact there was 2 children in a paediatric ward designed for 12. That’s a lie.

COVID19 is a virus that has undoubtedly caused significant harms to people whilst also shortening the lifespans of those who may have died soon anyway. The purpose of this, and other, investigations has not been to deny Covid or its severity for the vulnerable populations that it targets. The purpose of my investigations has been to expose ego-driven social media “experts” that are more intent on building their brand than they are are reporting the facts and to expose those who are seemingly working to an agenda that to keep fear levels raised and people hiding in their homes.

The takeaway message here is to never take, on face value, the claims you hear in the media or on TV unless those claims are underpinned by evidence that you can verify. And also, do not trust social media personalities for your news.

Gavin Yamey was caught deliberately and intentionally misrepresenting an article written by Professor Martin Kulldorff of the Great Barrington Declaration group. When we challenged Yamey on this he proceeded to spend the next 36 hours tweeting lie after lie about us whilst urging his 35K followers to report us to Twitter.
END_OF_DOCUMENT_TOKEN_TO_BE_REPLACED

The BBC in Northern Ireland have long acted as a PR machine for the Department of Health in their COVID-19 messaging. That messaging has mostly been little more than scaremongering and coercive in nature. In this report we look at how the BBC-NI helped propagate lies from a Doctor without verifying the doctor's claims or attaching a disclaimer to their broadcasts. After abandoning our complaints we were forced to circumvent them and go directly to the ECU who ruled in our favour.
END_OF_DOCUMENT_TOKEN_TO_BE_REPLACED

NI CMO Michael McBride is scolded by the General Medical Council (GMC) in the UK for his comments on the BBC.
END_OF_DOCUMENT_TOKEN_TO_BE_REPLACED

It’s been 2 years since Robin Swann took over as Health Minister in Northern Ireland and on this anniversary, we thought we would make available the now infamous, but deleted, BBC Spotlight programme with Conor Spackman wherein a leaked document…
END_OF_DOCUMENT_TOKEN_TO_BE_REPLACED

The Northern Ireland Executive, under direction from its Chief Medical Officer Michael McBride, decided to amend the face mask legislation requiring that anyone claiming exemption from wearing a mask must prove their exemption or they must be refused entrance to…
END_OF_DOCUMENT_TOKEN_TO_BE_REPLACED