The Announcement of Vaccine Passports Has Not Lead to 10,000 1st Doses 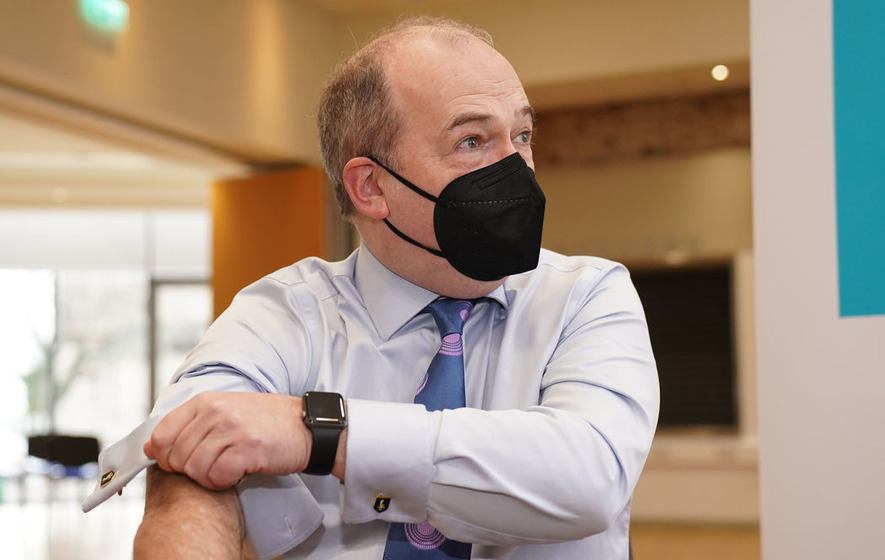 Northern Ireland Chief Medical Officer, Michael McBride, yesterday was quoted in several newspapers as claiming that 10,000 first doses of the COVID-19 vaccines have been administered in the week “since” mandatory Digital Health IDs were announced on the 17th November 2021.

He is quoted as saying,

We’ve seen 10,000 people come forward for first doses [in the week since mandatory Health IDs were announced] – that’s quite remarkable…it opens up that pathway into hospitality and I think there’s no doubt there is evidence that people will get the vaccine because they recognise that it opens doors into pubs and restaurants and allows people to get their lives back.

This was then followed by a media blitz as the claim was picked up and amplified, unchecked,

The Irish News would claim,

Northern Ireland has witnessed a surge in people coming forward for their first vaccination since the Covid certification scheme was announced, the chief medical officer has said.

So what does the data show?

Looking at the Department of Health Vaccination Dashboard, current as of 15:18 on the 25/11/21, it looks like this:

What we are interested in here is the middle column entitled “Vaccination (Dose 1)”.

If we are to take him literally, the “the last week” would be from the 17th November to 24th, the day he made the claim. Unless his weeks are different from ours.

The media were clearly attempting to sell McBride’s claims of 10,000 1st doses being as a direct result of the announcement of mandatory Digital Health IDs. The pitch seems to have been, ‘Hey, see threats work!’ But there’s an issue with that pitch.

Digital Health IDs were announced by the Executive on the 17th November 2021. If we look at the data for the 7-day period prior to the announcement, so the period from the 10th November to the 17th, it looks like this,

Carrying out the same simple calculation as above, then,

So in the immediate 7 days prior to the mandatory Health ID announcement, there were 4,060 more 1st doses injected into arms than in the 7 days after the announcement was made. This is important to note for those who wish to suggest that 1st dose vaccination uptake has increased since mandatory Digital Health IDs were announced.

Below is the interview Michael McBride gave to the media.

The Department of Health has just tweeted out some interesting stats on the age ranges of people who have taken their first dose of the COVID-19 vaccines over the past two weeks. (We’ve saved the tweet in case it gets removed).

As shown above, Michael McBride spoke on the 24th November and referred to numbers from “the last week” wherein he claimed 10,000 people had their first vaccine dose. We showed the Dashboard data has recorded 7,364 1st doses in that period, not 10,000. Now, the Department of Health have confirmed that the timescale McBride was referring was the 18th to 24th November. They also drop a bombshell. Regardless of whether there were 10,000 or 7,000 first doses, we now learn that only 2,735 of those were for adults aged 18+. That is significant, as the media and McBride himself pointed to the introduction of mandated Digital Health IDs as the driving factor for these (10k) people coming forward.

But also, it is, it opens up the pathway into hospitality and I think there’s no doubt there is evidence that people will get the vaccine because they recognise that it opens doors to pubs and restaurants and allows people to get their lives back.

Besides, the Digital Health IDs are, for now at least, only required by those 18+.

So what does this tell us? Even if we take Michael McBride’s claim at face-value, of there being 10,000 1st dose vaccinations in the previous week due to the introduction of the Digital Health IDs, then that falls on its own sword too as the Department of Health now claim only 2,735 of those jabs were in the 18+ age category. There is simply no benefit or reason why these health IDs would have coaxed 7,265 under 18s to get jabbed. And for the media or McBride to claim otherwise, is indeed suspicious.

We’ll continue to monitor the Vaccine Dashboard and media claims as we move forward into the Christmas period.

The BBC's William Crawley likes to position himself as a gatekeeper for the truth - someone who is at the forefront of tackling whatever he deems to be "misinformation". But William quite often spreads lies and disinformation himself. So who fact-checks him? Well, we do!
END_OF_DOCUMENT_TOKEN_TO_BE_REPLACED

Trish Greenhalgh is a mask zealot who has chosen the face mask debate as the rock on which her long academic career could well perish. We expose yet another instance of her making up stories to try and prove her narrative.
END_OF_DOCUMENT_TOKEN_TO_BE_REPLACED

As the unexplained numbers of excess deaths keeps rising in Northern Ireland, one MLA has worked hard to try and get the Department of Health to begin an investigation into what's causing these deaths. At every turn the DoH have frustrated Paul Frew's efforts and, as you'll see in this report, even sought to play down the number of deaths whilst also attempting to pass the responsibility to the Department of Finance knowing they weren't responsible for investigating such issues but it the DOH themselves that were responsible.
END_OF_DOCUMENT_TOKEN_TO_BE_REPLACED

SDLP Leader Could Eastwood took to the Nolan Show Live to demand that unvaccinated care-home staff should be fired and that young people should be coerced into taking the Covid injection or else find themselves ostracised from sections of society. He blamed the spread of Covid on the unjabbed saying that it was "a pandemic of the unvaccinated".
END_OF_DOCUMENT_TOKEN_TO_BE_REPLACED

Northern Ireland is experiencing a serious issue of non-COVID excess deaths that neither the Department of Health or its media wishes to investigate. Therefore, Alan Chestnutt decides that he'll do their job for them.
END_OF_DOCUMENT_TOKEN_TO_BE_REPLACED