Letter from a trauma survivor to Dr Michael McBride

Northern Ireland CMO Michael McBride has delivered a very dangerous message via the BBC. In what is a clear attempt to incite aggression by members of the public on those not wearing masks, he says that he challenges non-mask wearers who he deems should be wearing them. This has led to an outcry from victims of abuse, trauma survivors and those with hidden disabilities. 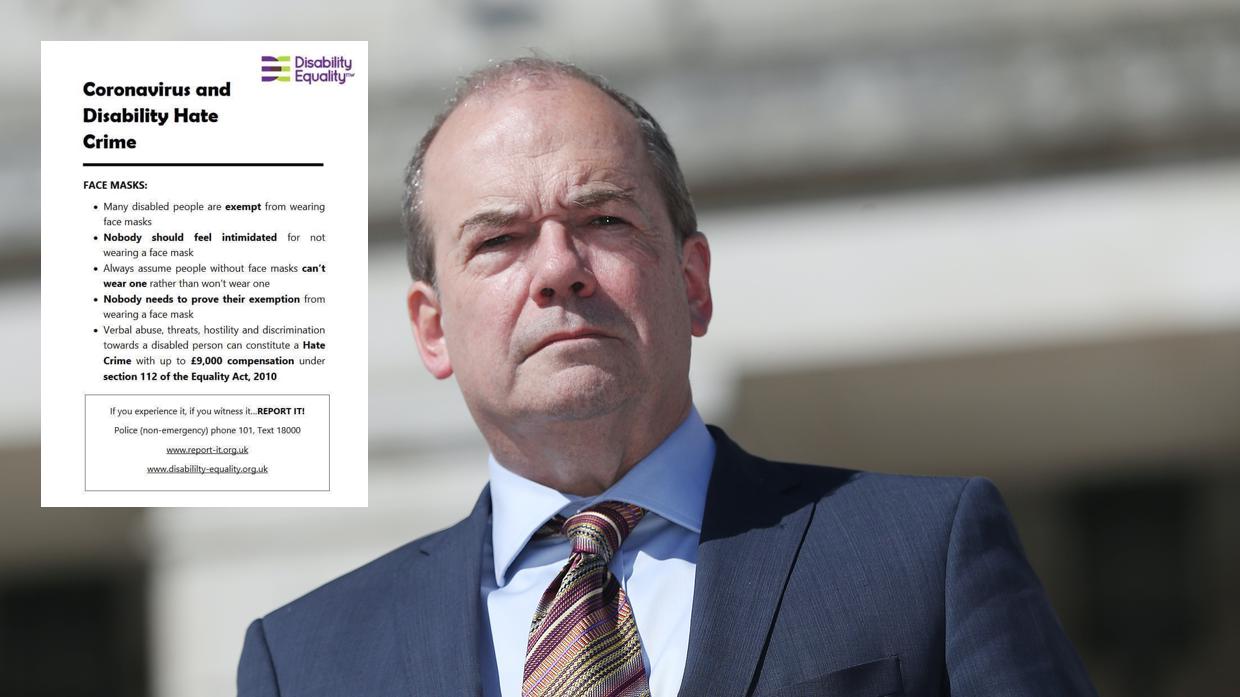 When I heard what Michael McBride had to say about people not wearing face coverings, I felt sick to my stomach.

He spoke of how it “upsets” him when he sees individuals not wearing masks “who clearly don’t have an underlying health condition”.

This man is a doctor. He is Northern Ireland’s chief medical officer. He must know that there are many people with serious non-visible medical conditions which mean that they aren’t able to wear a mask.

I am one of those people.

I’m a trauma survivor. I live with the after-effects of trauma on my mind and body every single day. Wearing a mask causes me extreme distress, and makes my symptoms much worse. It’s like a hand over my mouth, suffocating me.

It causes me to experience disturbing flashbacks, where I re-encounter the traumas I suffered as if they’re happening again, right at that moment, in all their horror. This can lead to a downward spiral of despair which ultimately ends in a pit of deep, deathly depression, from which I have to haul my way back, hand over hand, towards the light.

After a panic attack on a plane journey, where I was forced to wear a mask, my GP provided me with a letter of exemption. I carry that increasingly dog-eared letter with me everywhere. I know that I can simply state that I’m exempt, if asked, giving no reason, but I need to know it’s there at hand, should I need it. That letter is my protection against people like Dr McBride who seek to demonise trauma victims like me.

I know I’m far from alone in this. Because of our history, Northern Ireland has one of the highest rates of post-traumatic stress disorder (PTSD) in the entire world. Our suicide, depression and domestic violence rates are sky high. There are many people like me who can’t wear face coverings because it worsens their existing psychological conditions.

Michael McBride says that wearing a mask is an act of “respect”. He claims that he publicly challenges people who aren’t wearing masks and demands that they show him “respect” by wearing a face covering, just like him.

Michael, I ask you: where is your respect for the victims of trauma?

Do we not count in your world of compulsory mask-wearing? Are we lesser people who must be chastised, castigated and publicly humiliated for not complying with your mandate?

One of the things that survivors like me often develop is an acute awareness of other people’s psychological discomfort. During your television interview, I could see that you were nervous, breathless, trying to cover up some inner agitation.

Was it your conscience trying to make itself heard?

When you became a doctor, you swore to ‘first, do no harm’. You know, deep down, that by your words and actions you are causing serious harm to trauma victims and other sufferers. It’s written all over your face. Your own body knows the truth, even if you don’t.

By ostracising people who are unable to wear masks, and by marking us out as legitimate targets for public anger, you are making our lives even more difficult.

That must weigh on your conscience too. It certainly should do.

Michael, next time you feel “upset” about somebody not wearing a face mask, and want to publicly denounce them for not “respecting” you – stop.

The person you are targetting may be barely holding it together. They may even be walking a trembling tightrope between survival and non-survival. From the outside, there is no way of telling. They might be laughing or joking, but that’s no clue to how they really feel. I have smiled and chatted with people when I’ve felt like dying inside.

Doctors are supposed to help people, not harm them.

SDLP Leader Could Eastwood took to the Nolan Show Live to demand that unvaccinated care-home staff should be fired and that young people should be coerced into taking the Covid injection or else find themselves ostracised from sections of society. He blamed the spread of Covid on the unjabbed saying that it was "a pandemic of the unvaccinated".
END_OF_DOCUMENT_TOKEN_TO_BE_REPLACED

Northern Ireland is experiencing a serious issue of non-COVID excess deaths that neither the Department of Health or its media wishes to investigate. Therefore, Alan Chestnutt decides that he'll do their job for them.
END_OF_DOCUMENT_TOKEN_TO_BE_REPLACED

In the first of this 3-part series, we hear the stories of three brave residents of Northern Ireland who lost loved ones in care homes during different periods of the COVID-19 pandemic. With these first-hand accounts, you will learn that…
END_OF_DOCUMENT_TOKEN_TO_BE_REPLACED

NISRA publish weekly death statistics and also provide a summary which includes excess deaths based on a 5-year average, 2017-2021. However, our analysis will compare this to the 5-year average of 2015-2019, as these were the most recent ‘normal’ years…
END_OF_DOCUMENT_TOKEN_TO_BE_REPLACED

Naomi Long argues against the use of the 5-year-average as an acceptable measurement gauge but only for assessing non-COVID excess deaths in Northern Ireland. We take a closer look at why this may be!
END_OF_DOCUMENT_TOKEN_TO_BE_REPLACED