NI CMO Michael McBride is scolded by the General Medical Council (GMC) in the UK for his comments on the BBC. 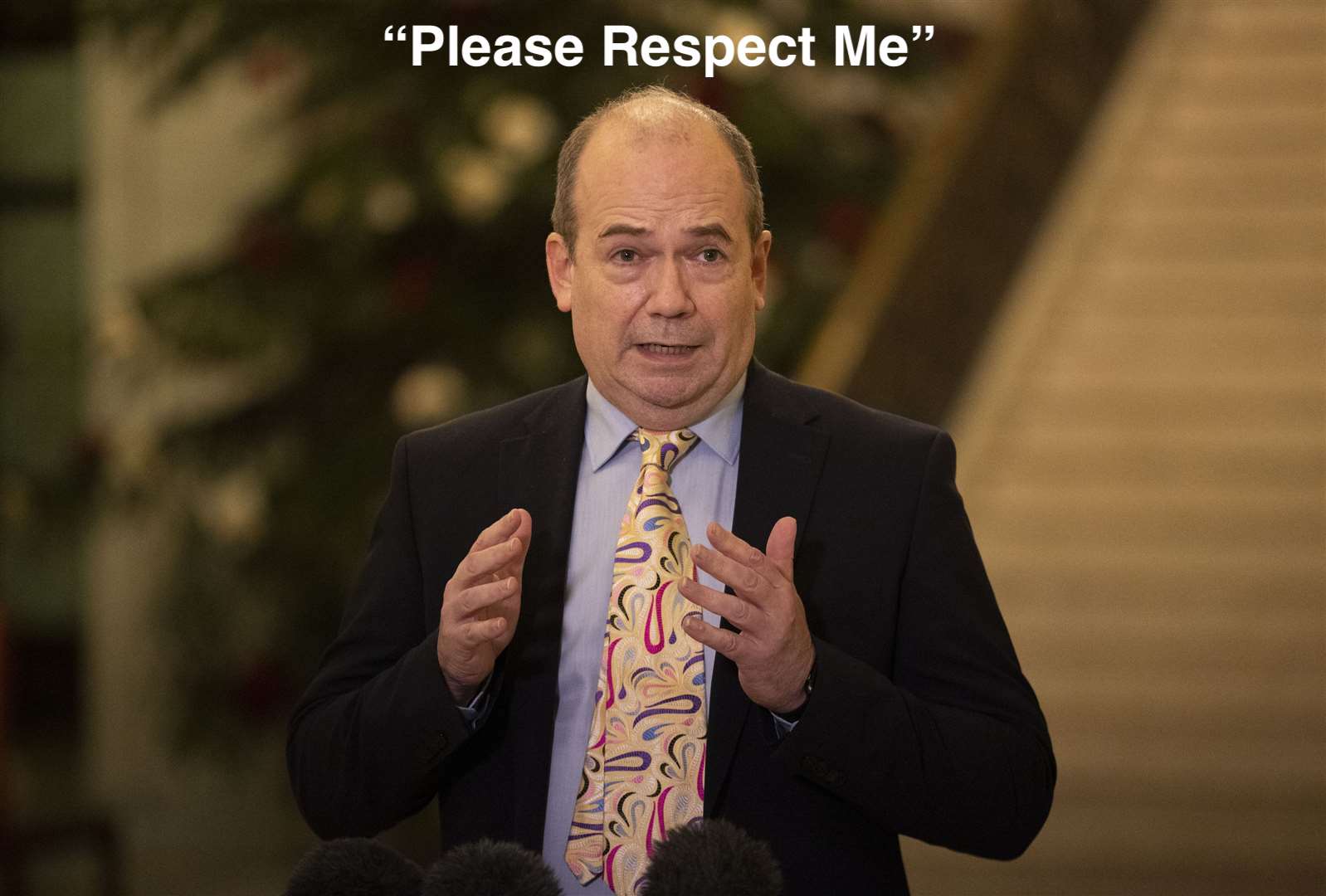 On the 9th December 2021, Northern Ireland’s Chief Medical Officer Michael McBride, on the BBC’s “The View” programme would call on people to “please respect me” as he told the BBC’s viewers of how he would challenge people who were not wearing face masks “who clearly don’t have an underlying health problem but choose not to wear [one].”

His comments would horrify a large section of people in Northern Ireland sending them into panic mode as they took his comments, on national TV, to be both inciteful and a green light to wannabe mask-vigilantes to also begin to challenge non-mask wearers when they were out and about.

We would soon be contacted by numerous survivors of sexual and domestic abuse who can’t wear masks due to their PTSD. These people were already struggling with anxiety for not being able to wear a mask when going shopping, and now that their CMO had approved of members of the public challenging those not wearing masks, they were now petrified. Some have since told us they didn’t leave the house over the Christmas holidays for fear of being challenged by people.

How can Michael McBride tell whether someone should be wearing a mask or not? How could he possibly know of their hidden disabilities or if they were abuse survivors? He demanded that people respect him and wear a mask, but where was his respect for those people who couldn’t wear a mask?

Why was he ignoring the advice issued by the NHS for members of the public to be aware that not everyone can wear a mask and that these people need to be shown respect?

We immediately filed a complaint, on behalf of the victims who had contacted us, to the General Medical Council as we felt Michael McBride’s words and conduct warranted further investigation. We have now received a response from the GMC.

The GMC responded by agreeing with us that Michael McBride’s comments were inappropriate that he “should appreciate not all disabilities are visible“. That is an unprecedented statement to be made by the GMC towards a Chief Medical Officer. How could the man placed in charge of the Nation’s health, be so discriminatory towards one of the most vulnerable sections of our community?

The GMC go on to say…

We do not support Dr McBride’s comments and recognise that he should appreciate not all disabilities are visible but we do not consider these issues are so serious that they indicate the doctor is unfit to work as a doctor.

While we are taking no further action ourselves, we do feel it is very important that these concerns are brought to the attention of the doctor’s Responsible Officer. This will allow the issues to be discussed at his next Appraisal or Revalidation meeting. If the Responsible Officer has further concerns about the doctor that requires our consideration, he can be referred to us in line with agreed procedures. (emphasis added)

This truly is alarming language. They go on to say,

We will send your concerns to the doctor’s Responsible Officer and ask them to address your complaint directly with the doctor as part of their appraisal. We may take further action if they tell us about any serious concerns, either in relation to your complaint or more generally. (emphasis added)

Of their role in this the council says,

Our role is directly related to the registration of doctors. Our responsibilities are all connected to keeping the Medical Register. We oversee medical education; we give entry to the Register for those suitably qualified; we advise on good medical practice while registered; and we remove or restrict registration in response to fitness to practise concerns where there may be a risk to patient safety.

An investigation can only be opened if the concerns raised are so serious that the doctor’s fitness to practise medicine is called into question to such an extent that action may be required to stop or restrict the way in which they can work to protect future patient safety.

The purpose of an investigation is to determine if or to what extent we need to restrict the doctor from working. We are not a general complaints body and we have no legal powers to intervene in or resolve matters for patients.

Whilst we are sorry to hear of the concerns which have prompted your complaint, we are not of the view that your complaint warrants us to restrict or remove the doctor’s registration.

Given their stated role we agree with their decision that whilst Michael McBride’s comments were shocking, they do not warrant the removal of his licence to practice and indeed that was not the aim of the complaint. The GMC responded in exactly the manner we had hoped for. Our aim was to seek for the council to acknowledge that his comments were inappropriate and to request that his superiors address the matter with him directly with the view that he will learn that discrimination is not acceptable in our society – no matter how it is disguised.

Again we reiterate that these comments from the GMC towards a Chief Medical Officer are astounding and the fact they are ready to act further should the need arise, speaks to just how seriously they took the complaint.

We sent several emails to Disability Action NI with the first being on the 12th December. They ignored them all and subsequent tweets as we sought to arrange contact with them on behalf of people with hidden disabilities.

We did likewise with the Rape Crisis Centre and likewise they ignored the victims whom we were contacting them on behalf.

We followed up on the above emails on 23/12/21 and these emails were also ignored by both organisations.

We were subsequently told by a well-placed source from one of these organisations that there was a real fear of standing up to McBride.

We lodged a formal complaint against Michael McBride on behalf of two survivors of assault who asked that we supply the complaints officer with their testimonies, which we did. Their testimonies can be read here and here. The complaint was acknowledged on the 15th December and we have just today chased it up for a response.

This whole ordeal was caused by an agitated and out-of-control CMO who was more concerned at being obeyed and respected than he was for the health and well-being of the victims of abuse and those with hidden-disabilities who cannot wear masks. It is our view he was showing signs of being out-of-control and he needed to be contained as his words and actions directly affect the entire country.

The GMC’s recommendations that his superiors be informed whilst noting their disapproval of his words is a significant result and we thank the GMC for supporting the concerns of those who were most effected by his words.

GMC Response to McBride Complaint
Skip back to main navigation

The BBC's William Crawley likes to position himself as a gatekeeper for the truth - someone who is at the forefront of tackling whatever he deems to be "misinformation". But William quite often spreads lies and disinformation himself. So who fact-checks him? Well, we do!
END_OF_DOCUMENT_TOKEN_TO_BE_REPLACED

Trish Greenhalgh is a mask zealot who has chosen the face mask debate as the rock on which her long academic career could well perish. We expose yet another instance of her making up stories to try and prove her narrative.
END_OF_DOCUMENT_TOKEN_TO_BE_REPLACED

As the unexplained numbers of excess deaths keeps rising in Northern Ireland, one MLA has worked hard to try and get the Department of Health to begin an investigation into what's causing these deaths. At every turn the DoH have frustrated Paul Frew's efforts and, as you'll see in this report, even sought to play down the number of deaths whilst also attempting to pass the responsibility to the Department of Finance knowing they weren't responsible for investigating such issues but it the DOH themselves that were responsible.
END_OF_DOCUMENT_TOKEN_TO_BE_REPLACED

SDLP Leader Could Eastwood took to the Nolan Show Live to demand that unvaccinated care-home staff should be fired and that young people should be coerced into taking the Covid injection or else find themselves ostracised from sections of society. He blamed the spread of Covid on the unjabbed saying that it was "a pandemic of the unvaccinated".
END_OF_DOCUMENT_TOKEN_TO_BE_REPLACED

Northern Ireland is experiencing a serious issue of non-COVID excess deaths that neither the Department of Health or its media wishes to investigate. Therefore, Alan Chestnutt decides that he'll do their job for them.
END_OF_DOCUMENT_TOKEN_TO_BE_REPLACED