Michael McBride, challenges people who he deems should be wearing masks and who aren’t. His words have caused deep hurt and pain for victims of rape and those struggling with hidden-disabilities. 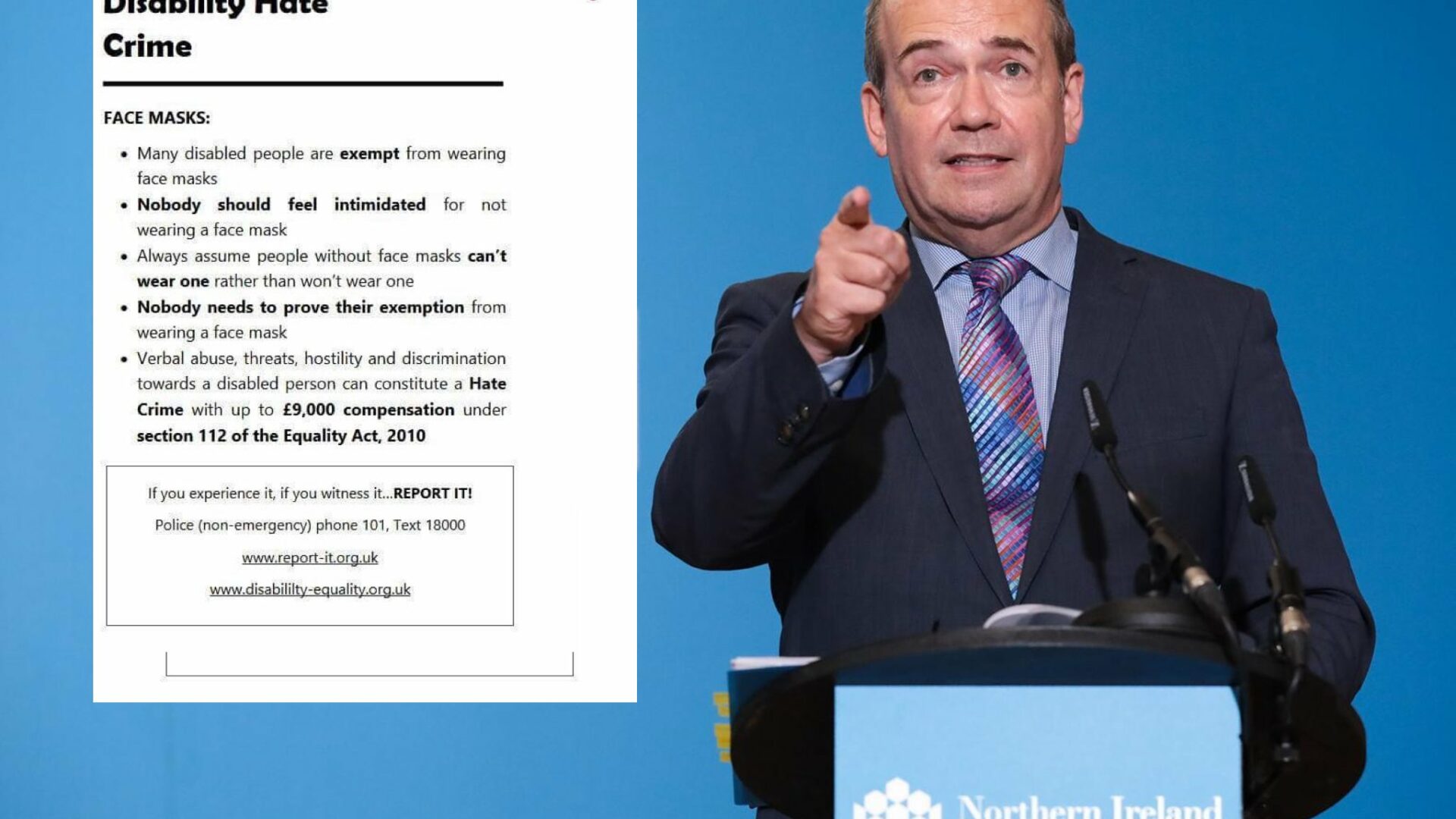 I am the victim of a rape that happened over 20 years ago.  Time doesn’t heal you when you’ve been raped. The memories are there always.  My face was covered with a pillow to the stage that I honestly thought I was going to die. I couldn’t breathe and remember sucking in so much of the pillow case that it became lodged in my mouth and I couldn’t get it back out. I managed to force the attacker off me when I caught a few deep breaths before I was back under the pillow again.

Since then, I cannot have any material covering face. Not even a blanket in bed. I have received years of counselling and therapy for what happened to me and whilst it has helped with teaching me how to live with the rape, it doesn’t make it go away.

Because of what happened to me I always felt like on outcast. Like I had a dirty little secret that I couldn’t tell anyone, a dirty secret that made me different from everyone else. I didn’t feel like I fitted in anymore and I always assumed people could see right through my eyes into my soul and could tell I was keeping a secret.  I couldn’t take it anymore and ten years after the rape I sought help.

When covid started and I was forced into lockdown I was also forced to relive my trauma every day.  Being told I couldn’t go out but for an hour’s exercise or just to buy food, brought back to me the loss of control I experienced when my abuser began targeting me.

I know through all the support groups that I attended that there are so many people who went through what I did and many of them had worse experiences.  The reoccurring theme was having our faces covered either by a hand or object.  So when masks became law in August last year I was afraid to leave the house for months. I ordered home delivery from Tesco or Sainsburys and did any other shopping on Amazon or eBay. Gradually with help from support groups I bought a hidden disabilities lanyard and began going out shopping late in the evening when the shops would be quieter.

This took me the longest time to gather the courage to do and then we were locked down again then we opened up for a week and then we locked down again after Christmas for months. Again I was forced to relive the traumatic experiences of my past. The loss of control, the fear, the anxiety, the panic attacks and being unable to attend support groups at times I felt like I couldn’t go on. What was the point?  But I did go on and I did get strong again and then when things opened up again in April I was challenged by a security guard in Sainsburys for not wearing a mask even though I was wearing a lanyard.  It was an awful experience and one that made me turn on my heels and come straight home where I spent days crying.  Why were people ignoring the trauma that victims like me live through everyday when it comes to masks?  I don’t want special treatment, I just to live my life without fear of being bullied or harassed ever again.  If I could wear a mask I would. I don’t want the negative attention. I’d love to be like everyone else . Life would be so much more simple.

After the Sainsburys incident I again bounced back and got back out shopping again wearing my lanyard and as I was building up a greater amount of courage and beginning to feel like hidden-disabilities were being acknowledged by the public when it comes to mask wearing our Chief Medical Officer appeared on TV to say that he challenges the non-mask wearers who he deems should be wearing masks.

This brought on a panic attack like no other for me.  That could be me he challenges. How does he know my situation?  I look perfectly healthy and normal on the outside but inside I’m in bits. People who meet me couldn’t tell what I’m living with.  I would be one those who Dr McBride deems as able to wear a mask on appearance alone and it is on appearance alone that Dr McBride says he challenges people.

“It does frustrate me and indeed it does upset me when I’m out and see individuals not wearing face coverings who clearly don’t have an underlying health problem but choose not to wear a face covering and yes do I challenge people? Yes, I do.”

How would Dr McBride know whether I have an underlying health issue?  Is he aware of what hidden-disabilities are?  Is he aware of just how dangerous his words were?  It was like he was telling the public it’s OK to challenge those not wearing masks because look even I do that.  Now I’m back to not leaving the house again.

I know of many people from my support group who are also petrified to leave the house after his public comments on the BBC. Please just understand that for some people, having their faces covered is a terrifying experience.  Please be respectful of them. Not all rape victims can’t wear masks, but many can’t.  I know people with severe anxiety issues who can’t have their mouths covered. My sister has severe anxiety issues and doesn’t mind wearing a mask, she actually feels comfortable wearing one as “it helps me hide my face” she would say. People react differently to different situations.

Dr McBride needs to retract his statement publicly to the same audience to who he made it.

I trusted Dr McBride throughout this pandemic. He was my go to expert and my trusted source. That changed when he said he confronts people for not wearing masks and more or less suggested others should too. He has left me afraid to leave the house now. His comments were reckless, dangerous, ill thought out and very inconsiderate.  I hope this letter helps him understand the hurt his words have now caused to the very people he is supposed to protect.

It’s been 2 years since Robin Swann took over as Health Minister in Northern Ireland and on this anniversary, we thought we would make available the now infamous, but deleted, BBC Spotlight programme with Conor Spackman wherein a leaked document…
END_OF_DOCUMENT_TOKEN_TO_BE_REPLACED

The Northern Ireland Executive, under direction from its Chief Medical Officer Michael McBride, decided to amend the face mask legislation requiring that anyone claiming exemption from wearing a mask must prove their exemption or they must be refused entrance to…
END_OF_DOCUMENT_TOKEN_TO_BE_REPLACED

We speak to Michael Brentnall of Brentnall Legal Ltd, a human rights law firm in Belfast regarding his legal challenges to the discriminatory vaccine passport system and changes to the face mask legislation in Northern Ireland. On the 29th of…
END_OF_DOCUMENT_TOKEN_TO_BE_REPLACED

We are joined for this special (belated) Christmas Edition with guests Jeffrey Peel and Keith Lonsdale.
END_OF_DOCUMENT_TOKEN_TO_BE_REPLACED