A 17 year old Derry teenager, Aaron Doherty, sadly lost his life due to a heart attack some weeks after testing positive for COVID-19. Before his death he tested negative however Michele O’Neill would use his death to further her own agenda. 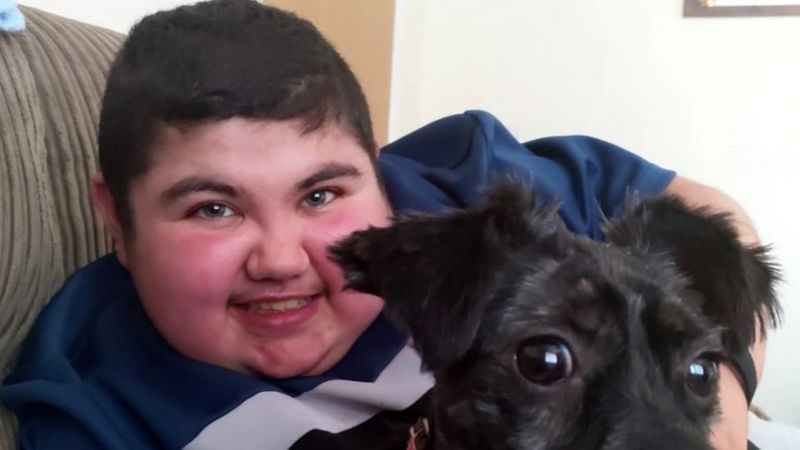 There has been a furore on social media over the past 24 hours after the deputy first minister of Northern Ireland, Michelle O’Neill, would use a weekly press conference to announce that a 17-year-old boy from Derry, Aaron Doherty, died after contracting the virus.

..this week we also lost the youngest member of our community, who died after contracting Covid. Aaron Doherty from Derry, who was just 17 years of age. Aaron’s daddy Jim has paid tribute to his beautiful son describing him as “a we gem”.

Social media went into a frenzy in support of Aaron’s father who denied that Aaron died from COVID-19 and asked that his son not be used as a ‘Covid statistic’.

I don’t want him to be remembered as a statistic, as the youngest person to have died of Covid. As far as we are concerned he died of heart failure.

We just have to get our point across. Aaron at the time of his death was Covid negative, we were told he had heart failure, that they couldn’t resuscitate him.

But the “media circus” had already begun in earnest, touting the death as a COVID death.

And the first person in the 0-19 age category has sadly passed away after contracting the virus.

Aaron Doherty, 17, from Derry, died at Altnagelvin Hospital on Tuesday after taking unwell on Monday.

The Belfast Telegraph would lead with the headline:

The Department of Health would register Aaron’s death as a “COVID-19 death” on their daily dashboard on the 29th October.

Northern Ireland’s Cool FM radio station would tweet out a video of Michelle O’Neill’s statement on the young boy’s death, claiming it a COVID death, only to delete the tweet after social media outrage was directed towards them for carrying “lies”.

We had a feeling the video would be removed, given the public outrage, so we archived it at the time.

Aaron was said to be struggling with an illness called Cushing’s Syndrome and ultimately succumb to a heart attack, from which his father claimed doctor’s couldn’t resuscitate him.

Aaron at the time of his death was Covid negative, we were told he had heart failure, that they couldn’t resuscitate him

Aaron’s death isn’t an isolated incidence of someone being incorrectly registered as being a COVID-19 death. We previously highlighted the matter raised by the SDLP MLA Daniel McCrossan to health minister Robin Swann wherein he asks the health minister about people dying from other illnesses but being registered as COVID deaths.

He contacted Mr McCrossan’s office asking could they tell him how many cases of incorrectly registered deaths was he referring to? They replied saying “three”.

That’s one MLA and one constituency being made aware of three people dying from other issues, but being registered as Covid deaths. Three families that had ‘COVID restricted’ funerals and who couldn’t say goodbye to their loved ones properly because of being wrongly documented as dying from the virus. Why is there not outrage about this from the docile media? Has it even been reported on by anyone other than us?

Aaron’s death, whilst tragic and heartbreaking for his family, is another such death adding to the statistics. He’s another “COVID-19 death” yet he didn’t die with or from COVID-19.

In a Freedom of Information request to the Department of Health, we asked them to define a “COVID-19 death”:

The deaths in the DoH dashboard include only those where the deceased had a positive test for COVID-19 and died within 28 days of the positive test whether or not COVID-19 was the cause of death.

He knew this already but like us found it striking to the point of almost disbelief, and even reading it again as we prepare this article, we’re equally shocked. The death count we are being fed a daily diet of isn’t a true count of those who lost their lives because of the virus. The Department is openly and honestly telling you that they count non-covid deaths as covid deaths as long as they are supplied with a positive PCR test result within 28 days of dying.

Aaron is a case in point. His father says he was told by the hospital that his son lost his battle with life due to a heart attack. But that doesn’t matter to the DOH or to politicians, like O’Neill, or the scenographic media, who all rushed to use it to further advance their agenda of scare-mongering.

The BBC also gets this definition wrong throughout their website as they incorrectly claim:

The department includes anyone who has died within 28 days of receiving a positive test for Covid-19 as a coronavirus-related death. (emphasis mine)

We found many instances of that error on their website. In fact, it is NISRA (Northern Ireland Statistics and Research Agency) that refers to “COVID-19 “related deaths” and not the DOH.

The DOH are quite clear they are referring to “COVID-19 Deaths”. But to leave no room for doubt, we raised the matter with the DOH via email: (data was correct at the time of submission)

I write to you seeking clarification on your recorded COVID-19 “related deaths”.

According to your daily COVID-19 bulletin for 17 August 2020 you note 335 total deaths occurred in hospitals where Covid19 was mentioned on a death certificate.

Please note, the 335 deaths occurring in hospital did not necessarily have COVID-19 on their death certificate and are not COVID-19 “related” deaths – NISRA reports weekly on COVID-19 related deaths based on death certificate mentions of the virus. The deaths in the DoH dashboard include only those where the deceased had a positive test for COVID-19 and died within 28 days of the positive test whether or not COVID-19 was the cause of death.

Very clear. The BBC once again showing that due diligence is not a forte of theirs.

It is our view that counting people who haven’t died from COVID-19 as COVID deaths is not an acceptable practice for many reasons. Fore-mostly, is the fact that families wouldn’t have the ability to say goodbye to their loved ones properly or to have a normal burial. Add to this how skewed it leaves the data when trying to determine the real numbers of those who died with and from the virus.

The truth is, that the Assembly cannot give an honest assessment of how many of the 697 deaths (correct at the time of writing) attributed as “COVID-19 deaths”, by the DoH, actually died from or with the virus. They don’t know yet they happily roll out these figures on a daily basis as if they are verified and confirmed.

We don’t do this with any other illness. Aaron actually tested negative for the virus before dying yet that didn’t stop Michelle O’Neill using this tragic incident to serve her own agenda of scaremongering and using the incident as a threatening-stick to those Aaron’s age to say ‘look this kills you too’. This matter should very much upset you all, as it does us. It is also our view that the deputy first minister knew exactly what she was doing and chose her words very carefully in the process,

this week we also lost the youngest member of our community, who died after contracting Covid. (emphasis mine)

Aaron did die after testing positive for the virus – weeks beforehand. However, the truth is, he died *directly after* testing negative. O’Neill didn’t mention that part because it didn’t fit with her agenda.

This is meant to be a pandemic. The Assembly use the daily figures to formulate policy. The public use the daily figures to determine how frightened they should be, and people like O’Neill and Swann like to help them along, making sure they’re good and frightened enough. But when those daily death figures may very well be of people who died not having the virus, then this is nothing other than medical fraudulence. To determine an incorrect cause of death could well cause a doctor his/her job, but somehow COVID has made that almost a legal requirement on medical professionals.

Be outraged. And question the corporate media the next time they repeat ad nauseam the daily death count from the DoH. Ask every journalist, have they made an attempt to verify those figures. When they say no, ask them why not. We have offered you 4 confirmed cases now of people that haven’t died of or with COVID-19 being registered as COVID-19 deaths. That’s just 4 we know of. How many more are there?

We send our heartfelt condolences and prayers to Aaron’s family, and we hope that this article does not cause them any further duress than the media and politicians have already put them under. If they find any part of this article not to their approval, then I’d ask that they contact me immediately, and I will either correct the article to their liking or remove it should they require.

I have found this story upsetting to a degree that I was reluctant to write about it. This young lad’s health struggles and his families’ ordeal helping him cope should be left out of the media and away from the public eye. Reading the lovely words from his father and how he spoke about him would be enough to bring a tear to the eyes of any person compassionate person.

Several people would reach out to us asking that we cover the story correctly, as the corporate media were failing to do so. Given how important it is to highlight this disastrous and devastating method the DOH are using to inflate their CV19 death count, I decided that the overall story was worth reporting on. So I signed off on it. I share the team’s sadness and would extend my own personal condolences to his family. RIP Aaron Doherty.

SDLP Leader Could Eastwood took to the Nolan Show Live to demand that unvaccinated care-home staff should be fired and that young people should be coerced into taking the Covid injection or else find themselves ostracised from sections of society. He blamed the spread of Covid on the unjabbed saying that it was "a pandemic of the unvaccinated".
END_OF_DOCUMENT_TOKEN_TO_BE_REPLACED

Northern Ireland is experiencing a serious issue of non-COVID excess deaths that neither the Department of Health or its media wishes to investigate. Therefore, Alan Chestnutt decides that he'll do their job for them.
END_OF_DOCUMENT_TOKEN_TO_BE_REPLACED

In the first of this 3-part series, we hear the stories of three brave residents of Northern Ireland who lost loved ones in care homes during different periods of the COVID-19 pandemic. With these first-hand accounts, you will learn that…
END_OF_DOCUMENT_TOKEN_TO_BE_REPLACED

NISRA publish weekly death statistics and also provide a summary which includes excess deaths based on a 5-year average, 2017-2021. However, our analysis will compare this to the 5-year average of 2015-2019, as these were the most recent ‘normal’ years…
END_OF_DOCUMENT_TOKEN_TO_BE_REPLACED

Naomi Long argues against the use of the 5-year-average as an acceptable measurement gauge but only for assessing non-COVID excess deaths in Northern Ireland. We take a closer look at why this may be!
END_OF_DOCUMENT_TOKEN_TO_BE_REPLACED