Stephen Nolan is a loud and vocal proponent on mask wearing for all in Northern Ireland to stop the spread of COVID19. He would say he’s viewed “the data” on how they work. Yet he’s never published that data, so I asked him for it. 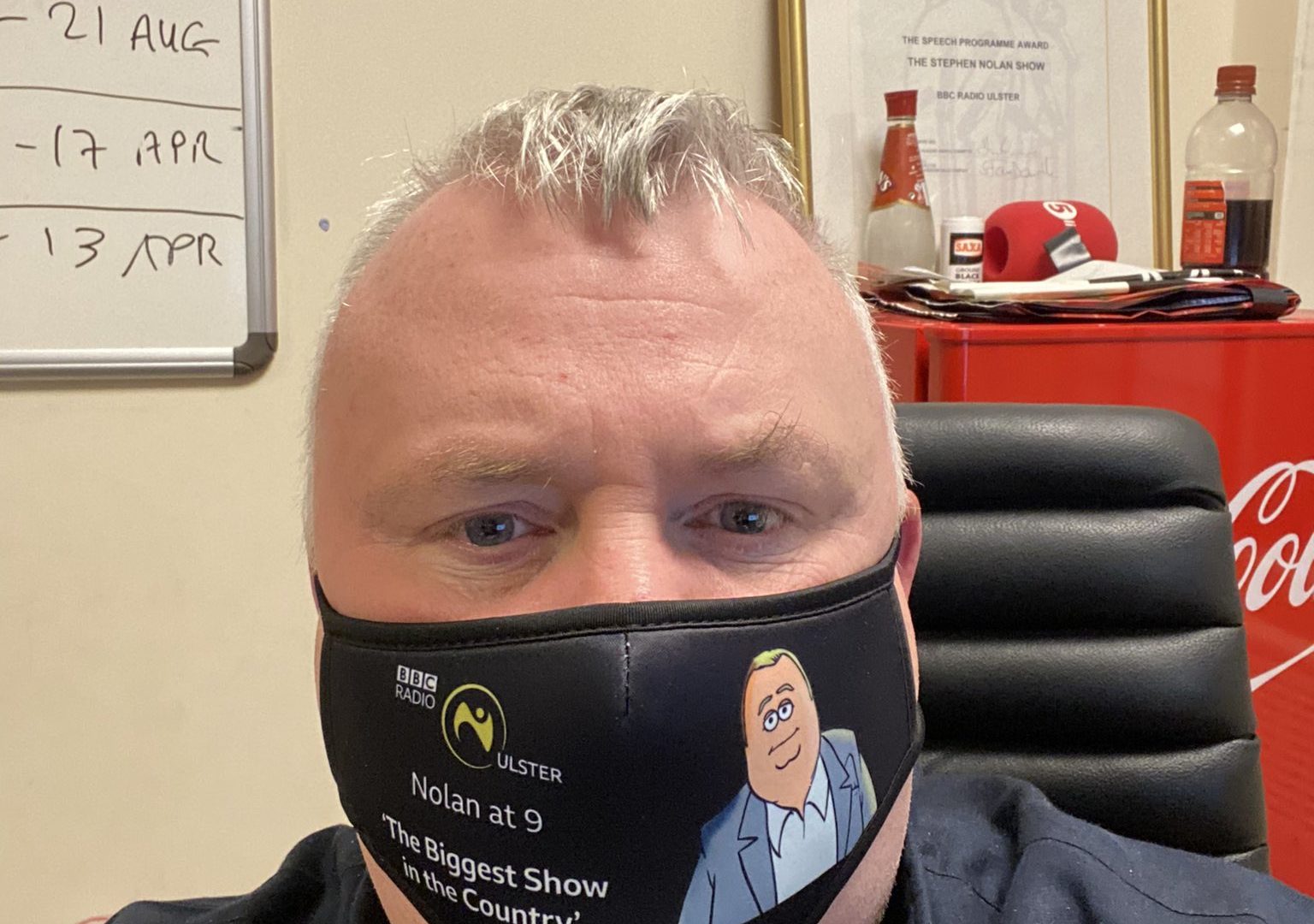 On Tuesday 27th October I sent Stephen Nolan an email in then hope of obtaining the data he was using to guide his support for mask wearing.

Stephen is one of the most vocal proponents of masks as a measure against COVID-19 and given his large audience base, his opinions are important. I’ve often heard him speak of “the data” surrounding masks claiming that he has viewed it and asking others have they? But I was unable to find to a time when Stephen actually supplied the data he refers to.

Some of our team began listening to his previous shows on the BBC to see if they could pick an instance when gave his sources, but they failed in their venture. For my part, I trawled social media to see if I could find a time he referenced same, and I failed. So I decided to email him directly and see what I could find out, with the aim of helping to better inform folk from Northern Ireland on the mask debate, given the lack of supporting science in favour of them.

We decided to publish the email as we feel Stephen has had ample time to respond and we also feel it’s a question that should be posed to him. Given he won’t respond to us, then maybe he may respond to someone else. If anyone hears back from him, please contact us and let us know.

We are currently working on a report looking into the current restrictions in place in Northern Ireland and whether these restrictions are supported by the science and if so, what science in particular?  The importance of this investigation can not be understated as in the pursuit to save lives, whilst also protecting the economy, there should be a coherent evidence-based strategy in place guiding the measures.  For if the approach isn’t evidence-based, then what is it based upon?  We have filed a plethora of FOI requests to gather required data from various organisations and as it filters in it assists us in assembling a much more detailed picture for the public of where we are, how we got here, and what the exit strategy is, indeed, if there even is one at all?

As part of that data mining we would be interested in obtaining the “data” that Stephen has viewed that informs his views on mask wearing.  In a tweet dated October 7, Stephen asks Paddy Barnes, if he has “looked at the data around how much a face mask protects the community around the wearer?”  Stephen goes on to say that he, himself,  has viewed it.

Is it possible if Stephen could, by return, furnish us with this “data” to help better guide us in our investigations? We are struggling to obtain such information from vocal proponents of face masks and it would be of great help if we could obtain the data that is alleged to support the wearing of masks as a measure to stop the spread of this virus in the general population.

I have also attached a graph of inpatient and ICU numbers, as per the DoH data, showing the trends before and after masks were introduced in NI.  I would qualify that by accepting that correlation does not necessarily equate to causation.  However, those that support the wearing of masks as a means to stop the spread must also accept that this graph shows a serious void in their argument.

Then in an August BBC Newsnight program, Deborah Cohen would uncover the following;

“Newsnight understands that the World Health Organisation Committee that reviewed the evidence for the use of face coverings in public, didn’t back them.  But after political lobbying, the @WHO now recommends them.”

Hopefully at this stage you will understand the contradictions that exist, from all sides, on the effectiveness, of lack thereof, of face masks for the general population, in stopping viral transmissions. Our aim, or one of, is to collate the data from both sides of the debate [masks work vs masks don’t work] to help better inform a very confused public of what the actual science says vs what the conspiracy theorists say.

As an aside, an example of such confusion can be tracked back to Stephen himself. It isn’t mandatory to wear masks outdoors yet Stephen would wear one whilst chasing shoppers outside of Creighton’s Garage only to remove the mask when back in the studio later that day interviewing. People have been asking why he wore one outdoors, where it isn’t mandatory, yet took it off indoors, when it is. Of course the caveat here is ‘wear mask when social distancing isn’t possible’ and whilst in the studio Stephen did keep his distance but all the public see is, mask on outdoors, mask off indoors.

As we head into a Winter of uncertainty, when we will likely lose many of our citizens, as we do every year. It’s imperative that the information the public receives is evidence-based, and guided by the science and that we be careful not to scare an already terrified vulnerable population. It is to this end that we, as citizen journalists and academics, seek to try and simplify an overly complicated message, but to ensure that that message is guided by the evidence.

In the first of this 3-part series, we hear the stories of three brave residents of Northern Ireland who lost loved ones in care homes during different periods of the COVID-19 pandemic. With these first-hand accounts, you will learn that…
END_OF_DOCUMENT_TOKEN_TO_BE_REPLACED

NISRA publish weekly death statistics and also provide a summary which includes excess deaths based on a 5-year average, 2017-2021. However, our analysis will compare this to the 5-year average of 2015-2019, as these were the most recent ‘normal’ years…
END_OF_DOCUMENT_TOKEN_TO_BE_REPLACED

Naomi Long argues against the use of the 5-year-average as an acceptable measurement gauge but only for assessing non-COVID excess deaths in Northern Ireland. We take a closer look at why this may be!
END_OF_DOCUMENT_TOKEN_TO_BE_REPLACED

‘One death from Covid is a death too many.’ We’ve all heard it. It was used time and time again to guilt people in to staying at home, testing themselves at every end and turn and even taking a new…
END_OF_DOCUMENT_TOKEN_TO_BE_REPLACED

On the 21st October, 2020, at a time when Robin Swann’s health service was operating as a ‘Covid only service’, Conor Spackman of BBCNI Spotlight investigated the cost of ignoring cancer patients in favour of Covid patients. In this now…
END_OF_DOCUMENT_TOKEN_TO_BE_REPLACED