Following on from our investigation into the misinformation being spread by Deepti Gurdasani, we now publish the Right of Reply offer she declined. 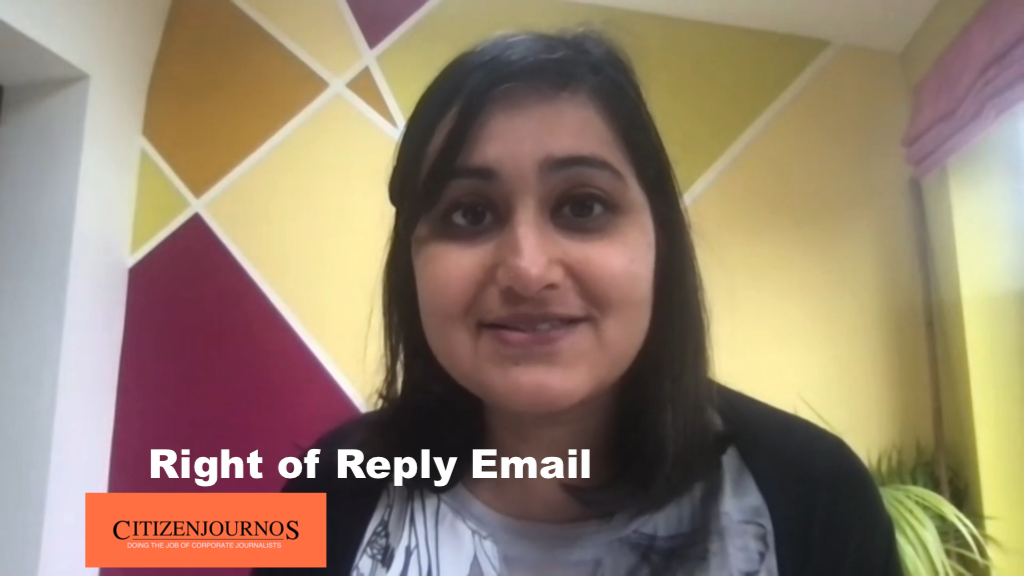 On the 24th May we released an investigation that looked into some of the claims made by Deepti Gurdasani, from believing we were in a 3rd wave of the virus back in March to claiming that incorrectly denoted graphs showed that schools were driving community transmissions. What the graphs actually showed was increases in test positivity rates prior to schools reopening due to a huge increase in testing.

Before publishing I wrote to Deepti with the main points that would be covered in our investigation offering her the opportunity to respond or challenge our findings. No response was received. However, today she has taken to Twitter claiming that we are ‘bullying’ her and the investigation was a “hit piece”. We are not sure how writing an evidence-based report on her claims equates to bullying and unfortunately that is something we can’t help mend as the insecurity lies with Deepti, not us.

Our offer of a full and unedited right of reply is still on the table, if Deepti wishes to avail of it.

My name is Philip Watson and I’m a citizen-journalist completing an article COVID-19 transmission rates around schools with attention on the period for schools returning in England on 8th March up to and including the 19th April when pupils returned again after the Easter Break.

As part of this investigation I have stumbled across a few tweets you made that I will be including in my report and I’d like to give you the opportunity to clarify several points your tweets raise.

1. In a tweet dated 28th April you stated that “many places started earlier – on the 26th..”, within the context of the exchange “places” refers to schools. Could I ask you to point to which schools in England opened on the 26th March that you’re referring to in this tweet?

2. In another tweet dated 28th April you claimed that “Schools are a huge contributor to transmission..” Could you share with me your underpinning evidence for this claim?

3. In a third tweet dated 28th April you linked to graphs from Kit Yates to support a claim that “It’s very clear that we saw increases in infection in schools after they opened, with declines during Easter.”

3b. Given that increases in the test positivity rate began to show prior to schools reopening and decline prior to schools finishing for Easter, how do you feel this fits with your claim that it was schools that were the driver of the increase in positive test results?

3c. How do you explain 3b also taking into consideration the “lag period” we hear so much about?

4. Are you aware that the graphs you linked to in Yates’ tweet contained denotations that had been ‘shifted left’, away from the dates in question, but in order to fit better with the graph’s trend lines?

View all posts by Philip
Skip back to main navigation

BBC Caught in an ‘Ass-Covering’ Exercise

The BBC’s Marie-Louise Connolly called for “young ones” in the 0-19 age group to be vaccinated. When challenged the BBC responded by saying that by “young ones” she meant those under 59. When challenged again the BBC concluded she meant teenagers only. In this example, we show how far the BBC will go to cover up for its won journalist’s disasters.
END_OF_DOCUMENT_TOKEN_TO_BE_REPLACED

Following on from our investigation into the misinformation being spread by Deepti Gurdasani, we now publish the Right of Reply offer she declined.

Independent Sage and Their Struggle With Graphs

Chris Pagel of Zero Covid grouping, Independent Sage, presented a poorly worded tweet displaying an inability to understand rolling rate data and how that is reflected in slides. I challenged her on this and I detail that exchange here.
END_OF_DOCUMENT_TOKEN_TO_BE_REPLACED

The Telegraph Retraction: No evidence that 12-15 year olds are “most responsible” for spreading

Henry Bodkin, a correspondent for the Telegraph claimed that "12 to 15-year-olds [are] one of the age groups most responsible for spreading the virus." After refusing to provide evidence for his claim we appealed to the Telegraph complaints department and forced them into retracting the statement.
END_OF_DOCUMENT_TOKEN_TO_BE_REPLACED

The Unmasking of Deepti Gurdasani: Disinformation and Misrepresentation

Deepti Gurdasani is a lecturer in Machine Learning at Queen Mary University in London. During the Covid-19 pandemic, she became a loud voice advocating on behalf of the extremist ideology for Zero Covid with a special focus on how kids are, in her view, 'huge spreaders' of the virus and therefore needed every aspect of their lives curtailed. In this report, we investigate some of Gurdasani's claims and find purposeful disinformation emanating from her around schools and their alleged impact on community transmission rates.
END_OF_DOCUMENT_TOKEN_TO_BE_REPLACED