Covid-19 Has It’s Own Advertising Agency in NI

The NI Executive has spent huge sums of money on advertising Covid to ensure people remain aware it’s still a threat, in case they had forgotten. We submitted a FOI request asking for a breakdown of their advertising costs. 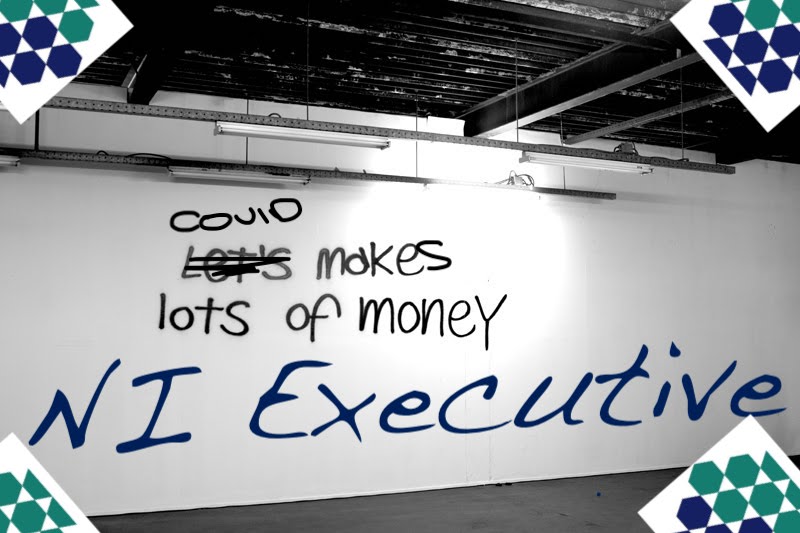 It was brought to my attention in March of this year that the Northern Ireland Executive was putting out to tender a £2 million contract for a ‘Covid advertising contractor’ to run for 24 months beginning 1 April 2021. Why would the Executive need to spend £2M advertising Covid, I pondered?

So I emailed the Executive Office in April requesting more information on this “agency” and asking them to explain that if Covid was so scary, why did it need to be advertised to remind people it existed?

I would receive this reply,

It didn’t tell me much but it also got me pondering again. £2M over 2 years is a lot of money just for advertising a virus. How much then had the Executive spent in the financial year of 20/21 on reminding the public there was a scary virus rooming around?

The Executive’s Covid Advertising Budget for 20/21?

The NI Executive spent £1.7M on “public health messaging in the 2020 – 2021 Financial Year” for COVID-19. That’s just their advertising costs! And that’s just the Executive Office! We have submitted Freedom of Information requests to all the relevant departments for their figures too.

Using a FOIR I asked the Executive for a breakdown of this expenditure by area of advertising, eg radio, TV etc. They replied:

My calculator tells me that amounts to over £1.7M.

I had also asked that they break that down for me further as I wished to ensure that they were obtaining advertising services fairly and impartially and not favouring, say, one particular outlet over the others. I also feel that it is important that the public are presented with all the information in a transparent manner so they know what their money is being used for and who it’s going to. Unfortunately at this stage of the process, the Executive feels you don’t need to know that information.

Any further breakdown of the information in terms of media outlet and service type purchased is being withheld as it falls under the terms of the exemption in section 43 (2) of the Freedom of Information Act as to release it would prejudice commercial interests.

Arguments in favour of disclosing the information

There is a presumption of a general public interest in disclosure.

Arguments in favour of withholding the information

There is a significant risk that disclosure of this information would jeopardise fair competition, distort the market and would impede the procurement of future government advertising

They didn’t apply much effort in introducing arguments in favour, did they?

Disclosure of this information may better inform the public about the management of government assets. There is, however, a significant risk that disclosure would compromise the delivery of Covid advertising, and indeed any government advertising, which would not be in the public interest.

After consulting with an informed source I have gone back to the Executive challenging their decision to withhold this information from the public arguing that I believe that given high levels of mistrust in government and its institutions along with suspicion around some Stormont depts favouring a particular news outlet over others, that by refusing to be transparent in this case will only serve to fuel further suspicions.

I will keep you updated on the progress of this investigation as it goes. We suspect this might have to go all the way to the Information Commissioner for him to adjudicate on as it’s unlikely the Executive will reveal the amounts of money it has been gifting to each media outlet as that in itself could prove to be extremely damaging if the information we have in our possession is proven to be correct.

It is our view that you, the people of Northern Ireland, have a right to know who your government is employing for their services and how much is being paid to each company for those services. If they wish to hold that information back from you then it needs to be explained as to why they feel revealing it would be damaging to the Executive and therefore you by extension. Their decision also needs to be scrutinised by the ICO to ensure it is lawful and if it is deemed to be so then the ICO also needs to explain why you shouldn’t know where your money is going and to whom.

Rest assured, this matter is receiving our full and focused attention and we will not rest until we have exhausted every avenue of challenge available to us.

The BBC's William Crawley likes to position himself as a gatekeeper for the truth - someone who is at the forefront of tackling whatever he deems to be "misinformation". But William quite often spreads lies and disinformation himself. So who fact-checks him? Well, we do!
END_OF_DOCUMENT_TOKEN_TO_BE_REPLACED

Trish Greenhalgh is a mask zealot who has chosen the face mask debate as the rock on which her long academic career could well perish. We expose yet another instance of her making up stories to try and prove her narrative.
END_OF_DOCUMENT_TOKEN_TO_BE_REPLACED

As the unexplained numbers of excess deaths keeps rising in Northern Ireland, one MLA has worked hard to try and get the Department of Health to begin an investigation into what's causing these deaths. At every turn the DoH have frustrated Paul Frew's efforts and, as you'll see in this report, even sought to play down the number of deaths whilst also attempting to pass the responsibility to the Department of Finance knowing they weren't responsible for investigating such issues but it the DOH themselves that were responsible.
END_OF_DOCUMENT_TOKEN_TO_BE_REPLACED

SDLP Leader Could Eastwood took to the Nolan Show Live to demand that unvaccinated care-home staff should be fired and that young people should be coerced into taking the Covid injection or else find themselves ostracised from sections of society. He blamed the spread of Covid on the unjabbed saying that it was "a pandemic of the unvaccinated".
END_OF_DOCUMENT_TOKEN_TO_BE_REPLACED

Northern Ireland is experiencing a serious issue of non-COVID excess deaths that neither the Department of Health or its media wishes to investigate. Therefore, Alan Chestnutt decides that he'll do their job for them.
END_OF_DOCUMENT_TOKEN_TO_BE_REPLACED