Robin Swann is a man of many faces. Someone who isn’t known for a willingness to be truthful. A man who says one thing to the public whilst advocating for the very opposite privately. 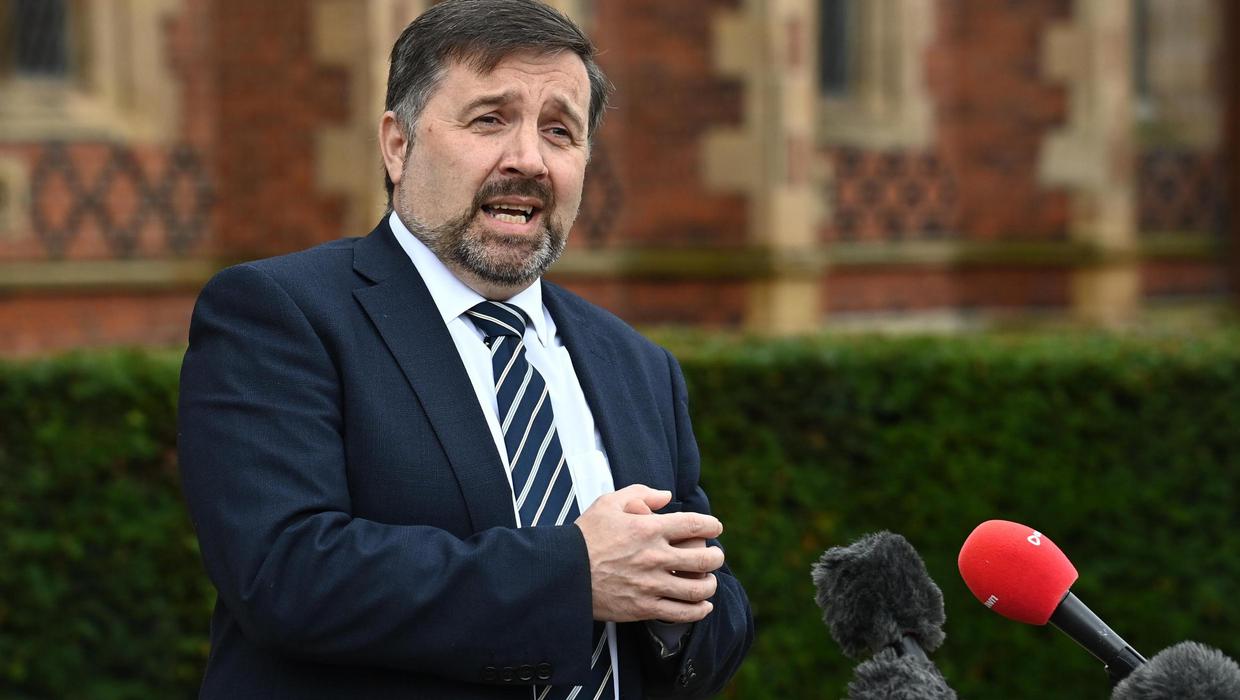 A few days ago, we detailed the many faces of Northern Ireland’s Health Minister, Robin Swann, drawing attention to how in just a few short months he went from a position of “It’s not something…[vaccine passports] that I think we should ever develop in Northern Ireland” to one of “I want a domestic vaccine certification scheme to be in place for use as soon as necessary“.

Following on from this well-read article, the corporate media then took the opportunity to challenge Mr Swann on his flip-flopping at the opening of a new Laboratory Information Management System at the Ulster Hospital on the 29th of September.

“I’ve heard commentary today especially in what I said in April and I think it’s always important when we look back over the last 18 months that we actually put things into perspective,”

“In April, we didn’t have the Delta variant, now Delta is our major variant and more transmissible than the Kent variant which was dominant at that point.”

However, like most things about Robin Swann there are glaring contradictions, this time such a contradiction exists between his latest statement and a statement he made in April.

In his latest statement he acknowledges that in April he was opposed to vaccine passports, and indeed he was, at least publicly anyway.

But the utilisation of Covid vaccine passports to access hospitality or close-contact services is not something that sits comfortably with me.

But there’s a necessity, or a possibility, for the utilisation for international travel, but not for accessing domestic services and support.

However, in a statement he made on the 28th September 2021, he claimed that as far back as 22nd April 2021 he was pushing for vaccine passports!

So on the 21st April, he is against domestic vaccine passports (publicly) and yet on the 22nd April (privately) he wrote to The Executive Office (TEO) “asking for this matter to be taken forward“.

These positions aren’t compatible with each other, therefore his public position in April was a lie. He was telling the public one thing, whilst behind their backs pushing for the complete opposite.

Today, Robin Swann is trying to tell us that his position on vaccine passports only changed due to the arrival of the Delta variant.

In April, we didn’t have the Delta variant, now Delta is our major variant and more transmissible than the Kent variant which was dominant at that point.

It’s worth noting that when he requested the TEO advance the concept of passports in April, there was 64% of the population vaccinated. Today with his new urgency there is 90% vaccinated. If vaccine uptake was the sole reason for Swann’s urgency in seeing vaccine passports implemented, then we must ask why he waited until cases were declining and 90% of the population are vaccinated before becoming vocal on the matter publicly?

And we must also ask why Robin Swann has seemingly not mentioned domestic vaccine passports publicly from April 21st to September 28th? Why the great urgency now?

Robin Swann is a walking contradiction. As “Health Minister” he called for fast-food outlets to remain opened, whilst also demanding that gyms be closed. He supported off-licences being deemed ‘essential services’ whilst legislating for the banning of outdoor sports. He supported the closure of schools, criminalisation of kid’s sports and suspension of urgent cancer surgeries. After telling us that when the modelling on the potential risks posed by COVID was made available he would share it with us, he then decided to keep it a secret when it painted a less frightening picture than he’d hoped for. When the modellers told him their ‘worst-case scenario’ was not likely to occur, that didn’t stop him pushing it as if it were inevitable. He warned of ‘deaths of biblical proportions‘ when at the time there had been a single death with a positive PCR test. He told us he was against vaccine passports on the 21st April, when on the 22nd April he wrote a letter urging TEO to implement them. He told us on the 29th September that he only changed his mind and supported vaccine passports when the Delta variant took hold yet the Delta variant hadn’t taken hold until May, and he urged that the passports be implemented on the 22nd April. This list could go and on…

In short, Robin Swann is a liar. He isn’t misinforming or spreading disinformation. He is lying about his position on domestic vaccine passports in the same way he lied about making the modelling public.

It has often been noted that he and the CMO Michael McBride take their lead from Scotland, a fact that was recently touched upon by Brendan Hughes of Belfast Live.

Throughout the pandemic Stormont has tended to follow the choices of other jurisdictions rather than lead the way.

I also noted this in March this year,

It is therefore quite a reasonable question to ask, “Why now?” Why the sudden urgency from Swann to implement vaccine passports when cases are plummeting and 90% of the population are vaccinated? Why not during the summer, when cases and deaths were increasing? I will close with this from a source close to the DOH whom I asked for an opinion on Swann’s timing and urgency,

‘He wants the infrastructure in place, it currently isn’t. The South has it in place, as has Scotland and Wales, and it can be turned on and off like a water tap. These “passports” are not about controlling a virus, they have far greater long-term possibilities for controlling the movement of people and if not implemented now there is a fear a great opportunity will have been missed. His rush now is more to do with the window of opportunity closing due to high vaccination rates and declining cases.‘

Gavin Yamey was caught deliberately and intentionally misrepresenting an article written by Professor Martin Kulldorff of the Great Barrington Declaration group. When we challenged Yamey on this he proceeded to spend the next 36 hours tweeting lie after lie about us whilst urging his 35K followers to report us to Twitter.
END_OF_DOCUMENT_TOKEN_TO_BE_REPLACED

The BBC in Northern Ireland have long acted as a PR machine for the Department of Health in their COVID-19 messaging. That messaging has mostly been little more than scaremongering and coercive in nature. In this report we look at how the BBC-NI helped propagate lies from a Doctor without verifying the doctor's claims or attaching a disclaimer to their broadcasts. After abandoning our complaints we were forced to circumvent them and go directly to the ECU who ruled in our favour.
END_OF_DOCUMENT_TOKEN_TO_BE_REPLACED

NI CMO Michael McBride is scolded by the General Medical Council (GMC) in the UK for his comments on the BBC.
END_OF_DOCUMENT_TOKEN_TO_BE_REPLACED

It’s been 2 years since Robin Swann took over as Health Minister in Northern Ireland and on this anniversary, we thought we would make available the now infamous, but deleted, BBC Spotlight programme with Conor Spackman wherein a leaked document…
END_OF_DOCUMENT_TOKEN_TO_BE_REPLACED

The Northern Ireland Executive, under direction from its Chief Medical Officer Michael McBride, decided to amend the face mask legislation requiring that anyone claiming exemption from wearing a mask must prove their exemption or they must be refused entrance to…
END_OF_DOCUMENT_TOKEN_TO_BE_REPLACED