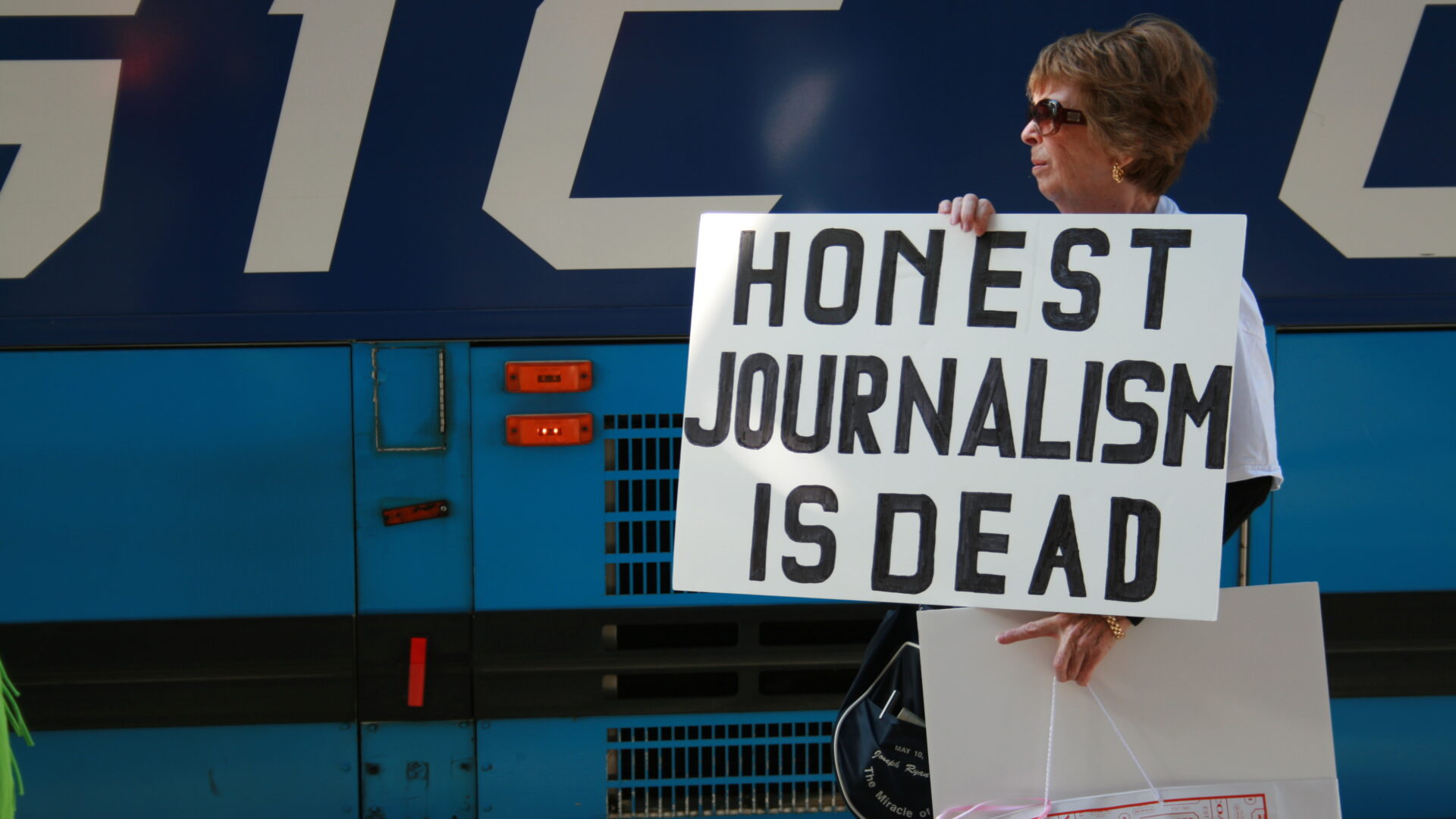 Media coverage of the Covid-19 pandemic has been very obviously one sided since March 2020. We’ve all been bombarded with negative stories of ‘biblical proportions’.

Even when there have been improvements in the pandemic position the media still prefer the scaremongering stories that leave many people afraid to return to any kind of normal life.

We regularly see media outlets asking why we haven’t locked down sooner and harder and we rarely see any of them asking for evidence to support the decisions made by the government. This has been a frustration to many people since this began.

The one-sided nature of the media reporting is particularly obvious when we look at the difference in the treatment of two Northern Ireland based doctors, both of whom made claims on social media regarding covid-19.

Dr Keelan published a tweet on the 22nd July 2021, now made infamous by an earlier Citizen Journos investigation, in which she stated:

BBC Northern Ireland gave the tweet airtime on multiple occasions the following morning, twice on the Good Morning Ulster show, and again later in the morning on The Nolan Show.

The first mention on Good Morning Ulster highlighted the Dr Keelan tweet as supporting information regarding the pressure hospitals were experiencing due to Covid and the unvaccinated:

The second mention later in the same programme in discussions with the medical director of the Belfast Trust, Dr Chris Hagan:

Later in the morning on The Nolan Show, Stephen Nolan uses the tweet as support for his argument with a 25-year-old caller, as to why he should be vaccinated, citing the tweet as proof unvaccinated people in his age group are seriously ill in hospital:

The tweet made by Doctor Keelan was picked up by both BBC shows and communicated to listeners as fact. There was no challenge or request for confirmation, even from the Medical Director of the Belfast Trust.

The tweet was also treated as factual in other media channels.

“Belfast Trust suspends some operations due to pressures including Covid”

Both the Belfast Live and Daily Mirror Northern Ireland report on the Belfast Trust’s announcement that some operations are cancelled, and includes comment from the medical director, Dr Chris Hagan, that 60% of patients admitted with Covid symptoms are unvaccinated. The articles both quote the Dr Keelan tweet as supporting information for the content of the articles.

Earlier this month, Citizen Journos concluded the investigation into the claim made by Dr Keelan in the articles, Confirmed: The Mater Hospital Was NOT Full of Unvaccinated 20/30-Year-Olds on Ventilators on the 22nd July and The Matergate Lies – Dr Emma Keelan. The investigation conclusively established the tweet by Dr Keelan was disinformation, she lied.

To date there has been no attempt by any of the mainstream media channels which amplified Dr Keelan’s disinformation to retract or apologise for spreading the lie. BBC Northern Ireland are in receipt of a complaint on the matter yet three months later they have failed to address, never mind resolve the complaint.

Now we will move onto the claims made by Dr Anne McCloskey a GP from Derry who came out of retirement at the beginning of the pandemic to assist with GP out-of-hours services. Dr McCloskey recorded a video which was shared across social media on the 22nd August 2021. The full nine minute video can be viewed here.

The claims made by Dr McCloskey regarding the pandemic do not fit with the standard narrative being pushed by the government and mainstream media.

The purpose of this article is not to defend, fact-check or condemn the comments made by Dr McCloskey, but to highlight the very different treatment by the corporate media.

Here’s an example of some of the corporate media coverage of Dr McCloskey’s claims:

“Dr Anne McCloskey, who came out of retirement when the pandemic hit, took to social media on Sunday to share a video in which she expressed a series of “anti-vaccine” views”

The articles are just a sample, but a quick Google search under “Dr Anne McCloskey” will reveal many more articles on the subject, frequently using the derogatory label of “anti-vaccine”.

BBC Northern Ireland published their own article in which they stated “There is no evidence to Dr McCloskey’s claims”.

They made no such statement while repeating Dr Keelan’s tweet. This is despite the fact there there was indeed no evidence to Dr Keelan’s claims.

For the first half of the interview , William Crawley challenges Dr McCloskey’s views with regular interruptions, and attempts to dismiss each of her claims. Around the halfway mark, William Crawley then brings out BBC-approved experts, Dr Gabriel Scally, of Independent Sage and University of Bristol, and Dr Simon Clarke, microbiologist from the University of Reading.

William allows each of them free reign to rubbish and discredit Dr McCloskey’s opinions, without any challenge to any of the statements they make themselves. This includes a piece by Dr Scally, in which he makes a ridiculous claim regarding the situation in Israel.

Dr McCloskey earlier in the call cited Israel as evidence the vaccines were ineffective at preventing transmission. Dr Scally’s response to that around the 38:30 mark:

Anne quoted the experience from Israel, let me tell you what the experience from Israel was. Yes, they did have a problem with people developing Covid after the vaccine in the early days of the vaccination programme, because what happened was it went so fast, the vaccination programme, that people developed Covid in the very short time after the second dose before they got the full protection, and secondly in those days, there was a euphoria and many people as soon as they got it into their arms went out and did things that they would have previously been very cautious about doing.

Unfortunately for Dr Scally we can disprove his ‘theory’:

The charts from Our World in Data show that Israel did in fact roll out their vaccine programme very quickly, and by April 2021, the majority of the adult population were fully vaccinated. In the following months, there was very low activity in terms of Covid cases, and was only in July, three months later, where cases began to rise sharply again. Therefore, Dr Scally’s claims that cases in Israel were contracted immediately after vaccination are false, and at the time of the Talkback interview, case numbers were practically as high as they were back in January, he was either unaware of that fact, or chose to ignore it.

Did William Crawley or Dr Clarke challenge or seek to correct him? In short no, no comment at all.

William Crawley did make a telling remark during the interview at 24:10:

An ethical decision needs to be made by a programme and even giving a platform to some examples of clear misinformation or confusion in a pandemic. Simon, there are people who are saying we shouldn’t even be doing this, because it’s potentially irresponsible, so it’s difficult to know how to deal with this because we have to address the claims that are being made, especially as they’re being made by a qualified doctor here.

That is a clear admission as to the purpose of bringing Dr McCloskey on air to be confronted by William Crawley and the two doctors. It wasn’t to have a fair debate, it was to conduct a hatchet job on Dr McCloskey and discredit and ridicule all her claims.

They don’t fit with the narrative and so they are presumed false.

Now compare and contrast the treatment of the two doctors, Dr Keelan and Dr McCloskey.

Dr Keelan’s now proven lie was promoted and amplified, being used as evidence of the situation in the Mater hospital, and the fact that her claims have been proven false have never been addressed and have been ignored by the BBC Northern Ireland.

We won’t hold our breath on BBC Talkback inviting Dr Keelan on air and challenging her on her fearmongering and potentially dangerous tweet.

Dr McCloskey’s controversial claims were attacked, and she has been personally vilified and ridiculed.

The corporate media have played a huge part in the Covid-19 pandemic and have benefitted financially from advertising campaigns or, as in the case of the BBC, are publicly funded through the TV license fee.

The treatment of these two Northern Irish doctors highlights the biased nature of the reporting that the public are subjected to.

It is clear that we will hear what the mainstream media decides aligns with the government narrative and it will be communicated to the public through various channels regardless of whether it is true or not. Facts won’t be checked and complaints won’t be acknowledged.

Any other views and opinions, regardless of validity will not be tolerated.

Disinformation is simply that, disinformation. It should be challenged regardless of the side of the narrative it supports.

The BBC which gave airtime to the Dr Keelan disinformation on multiple occasions has this to say on their website:

“Our editorial values say: “The trust that our audience has in all our content underpins everything that we do. We are independent, impartial and honest. We are committed to achieving the highest standards of accuracy and impartiality and strive to avoid knowingly or materially misleading our audiences.”

The evidence we have portrayed in this article suggests that BBC Northern Ireland are neither “impartial” or “honest”.

The BBC's William Crawley likes to position himself as a gatekeeper for the truth - someone who is at the forefront of tackling whatever he deems to be "misinformation". But William quite often spreads lies and disinformation himself. So who fact-checks him? Well, we do!
END_OF_DOCUMENT_TOKEN_TO_BE_REPLACED

Trish Greenhalgh is a mask zealot who has chosen the face mask debate as the rock on which her long academic career could well perish. We expose yet another instance of her making up stories to try and prove her narrative.
END_OF_DOCUMENT_TOKEN_TO_BE_REPLACED

As the unexplained numbers of excess deaths keeps rising in Northern Ireland, one MLA has worked hard to try and get the Department of Health to begin an investigation into what's causing these deaths. At every turn the DoH have frustrated Paul Frew's efforts and, as you'll see in this report, even sought to play down the number of deaths whilst also attempting to pass the responsibility to the Department of Finance knowing they weren't responsible for investigating such issues but it the DOH themselves that were responsible.
END_OF_DOCUMENT_TOKEN_TO_BE_REPLACED

SDLP Leader Could Eastwood took to the Nolan Show Live to demand that unvaccinated care-home staff should be fired and that young people should be coerced into taking the Covid injection or else find themselves ostracised from sections of society. He blamed the spread of Covid on the unjabbed saying that it was "a pandemic of the unvaccinated".
END_OF_DOCUMENT_TOKEN_TO_BE_REPLACED

Northern Ireland is experiencing a serious issue of non-COVID excess deaths that neither the Department of Health or its media wishes to investigate. Therefore, Alan Chestnutt decides that he'll do their job for them.
END_OF_DOCUMENT_TOKEN_TO_BE_REPLACED