Trish Greenhalgh of the University of Oxford has suggested a jogger infected with COVID19 could pass it to a pedestrian as they run past “puffing and panting”. Her claim was carried by many major news outlets. But just how rooted is that claim in evidence or science? 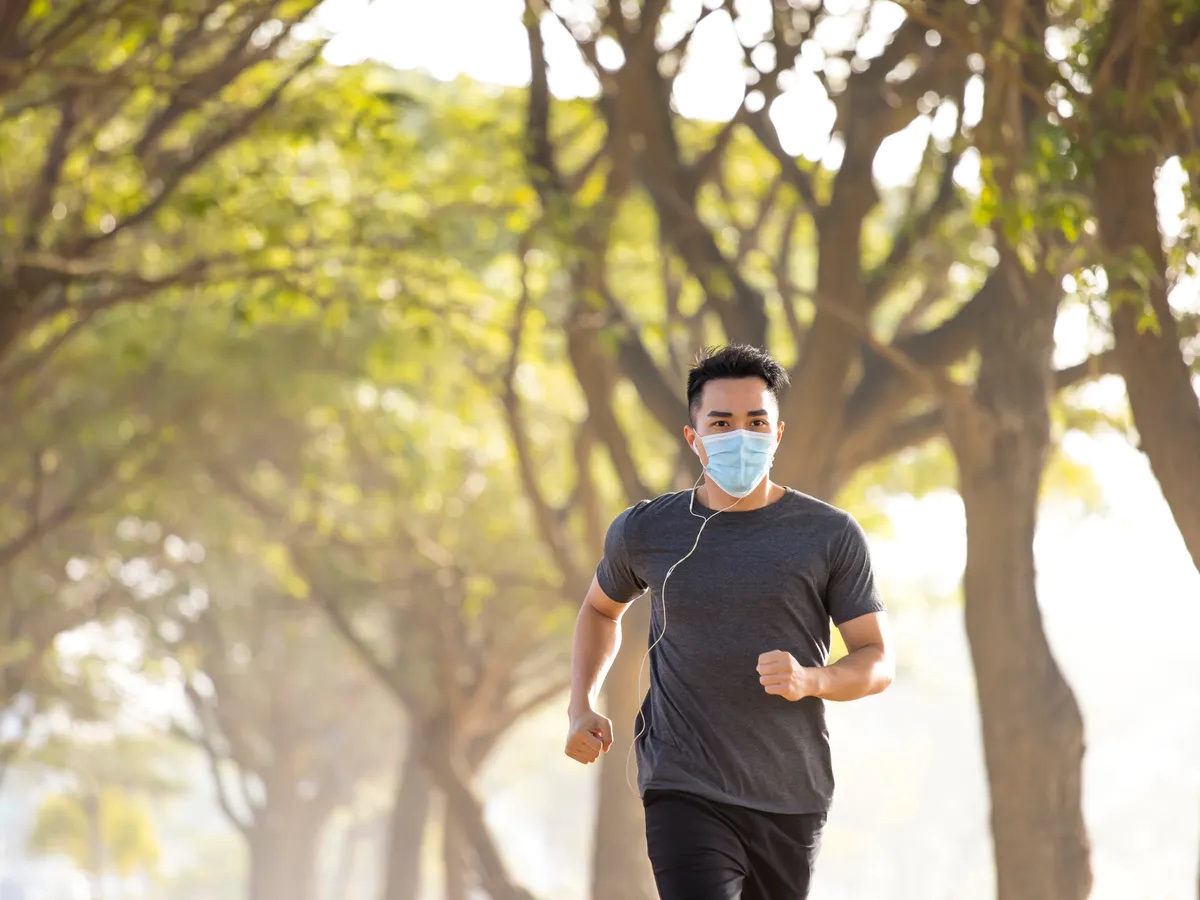 Further to my article on claims made by Professor Trish Greenhalgh, that 40% of Covid transmissions are from asymptomatic persons, I now want to pick up on her second claim of the GMB interview.

The exercising jogger, the puffing and panting jogger, you can feel their breathe come and you can sometimes actually feel yourself inhale it. So there is no doubt there is a danger there.

So you’re jogging along, you think you’re fine, and then the next day you develop symptoms of Covid but you’ve actually breathed that Covid on to someone, perhaps – you know – an old lady walking a dog or something like that.

Trish feels passionate that a passing jogger if infected and if infectious could pass on the virus to the person they brush past on a footpath. It is under such circumstances that Professor Greenhalgh advocates wearing a face covering. When in open space she removes her mask and runs freely.

Two questions immediately came to my mind upon listening to the professor.

I was already aware of the lack of studies determining the amount of viral dosage that it takes to infect a healthy host. But I had read an article containing an informed hypothesis that I reference next.

For SARS, the infective dose in mouse models was only a few hundred viral particles. It thus seems likely that we need to breathe in something like a few hundred or thousands of SARS-CoV-2 particles to develop symptoms.

Willem van Schaik – Professor of microbiology at the University of Birmingham

This hypothesis is based on the known infectiousness and transmissibility of SARS which was, according to the Professor, a lot less transmissible than SARS-CoV-2. So he adjusted the viral dose accordingly and suggested dosage of hundreds to low thousands of particles to cause infection.

The next question I set out to answer was, how much viral dose would likely be exhaled from an infected jogger as he brushed past a person? Again, such measurements have not been taken nor studied at present but there was a small study carried out in July 2020 and published in the Annals of Internal Medicine. Four subjects, from hospitals in South Korea, who were infected with Covid19, volunteered to participate in the study to evaluate the effectiveness of surgical and cloth masks at filtering SARS-CoV-2.

In the first scenario, the participants were requested to cough 5 times into a petri dish that was 8 inches away from their mouths without wearing a mask. The petri dish contained “viral transport media” that would allow for the viral particles to survive with the view to being counted.

The median viral loads after coughs without a mask..were 2.56 log copies/mL

Log values are used to measure viral load and so to covert that figure to copies of the virus per mL I used a conversion table. The result is 363 particles of virus per 1 ml of “viral transport media”.

Let’s bring that together. Willem van Schaik suggests that hundreds to low thousands of virus particles are required for an infection to occur and the study from Korea calculated a median of 363 viral particles expelled after an infected person coughs 5 times into a dish 8 inches away from their face and in a controlled environment, indoors.

Without labouring the issue further, as it begins to get very technical and distractive, the point is that giving this quantifiable data it would be near impossible for a passing infected jogger to infect you on a footpath. For if, say, 900 viral particles are required to infect a healthy host with SARS-CoV-2 and the study found that only 363 viral particles were expelled after 5 coughs, indoors – that’s 2.5 times less than the amount required for an infection and that’s taking the lower approximation of van Schaik of hundreds rather than thousands of particles.

But before moving on it is worth paying brief attention to a study that looked at the rate of viral emissions. So we have informed views around the number of viral particles that may be required to cause an infection but over how long a period would it take for such concentrations to gather in the atmosphere?

In a study looking at the content of virus particles in exhaled breath, the researchers concluded,

The team estimates that the exhaled emission rate of SARS-CoV-2 was about 1,000 to 100,000 virus particles per minute, with the highest rate seen during the early stages of COVID-19.

So even the lowest estimate of 1,000 particles, which is also in the lower range of Van Schaik’s proposed load for infection, it would take a minute, at the very least, to gather enough viral concentration to cause an infection. But we’re talking about a jogger brushing past someone on a footpath in an interaction that may last 1-2 seconds, if even.

There are a lot of limitations with the data presented above and no one is claiming the science has been settled on the matter, in fact it hasn’t even begun to be carried out. However, given the lack of data around the viral load and viral dosage, this is all that we have to work from at present and therefore I present the information as an informed guide.

So there’s a reason why all available studies show that the vast majority of transmissions are traced to indoor events. Because that’s where they occur. Either due to poor ventilation or lack of ability to distance to higher concentrations of viral aerosols being gathered over longer periods. Hence why the advice is to open windows or doors and let air circulate.

To put the likelihood for outdoor transmission into context, a study in China following 318 outbreaks found that only one of those was traced to an outdoor interaction.

We identified only a single outbreak in an outdoor environment, which involved two cases.

Our study does not rule out outdoor transmission of the virus. However, among our 7,324 identified cases in China with sufficient descriptions, only one outdoor outbreak involving two cases occurred in a village in Shangqiu, Henan. A 27-year-old man had a conversation outdoors with an individual who had returned from Wuhan on 25 January and had the onset of symptoms on 1 February.

Professor Emeritus, Keith Neal, an epidemiologist from the University of Nottingham said:

Walking or running past someone is such a fleeting contact then the possibility of infection is incredibly low and approaches zero.

Professor Paul Hunter of the University of East Anglia says:

So I would argue strongly against wearing masks outdoors unless you have to be in a crowd and the examples that Chris Whitty gives of huddling around a market stall and being in a large queue are probably the only such situations when this may be justifiable.

Professor Cath Noakes is an airborne infection expert from the University of Leeds and she told the BBC:

someone would have to cough right at you, at the moment you’re inhaling, for an infection to happen.

Going for a run with someone and following close behind them for 20 minutes or more, breathing in their slipstream, might be a problem, she says.

On the 11th January 2021, Professor Chris Whitty told the BBC that there was “extremely low risk” in having a “fleeting contact” with a jogger.

The World Health Organisation are adamant that people should NOT be wearing masks when exercising:

One could then argue that Whitty saying there’s “extremely low risk” is not the same as saying “no risk at all” and therefore wearing a mask could mitigate the small risk even further. However, all the other data that I’ve supplied must also be taken into consideration. There is no such thing as “zero risks” in anything we do and the evidence presented herein points to mask-wearing when running outdoors being as productive as knocking an apartment block down to kill an elusive wasp. It’s overkill and the risks of doing so far outweigh the risks of doing nothing.

The thing with the Zero Covid ideology is that it’s a rabbit-hole and once you enter you inevitably are drawn deeper and deeper inside and as your vision decreases rapidly all you have to use as a guide is hope. Hope that you reach the other end.

Another analogy is that of an alcoholic begging for just one more drink before quitting, “Zero Covider’s” always want one more intervention, just another lockdown, just one more revocation of some freedoms; if we could also just have masks here and here…it’s an addiction that consumes the addict to the extent that all rationale is lost. When common-sense becomes less and less common. They care not about the destruction and devastation that will be borne out of implementing their idea because to them the end justifies the means.

If someone wishes to wear a mask outdoors when running, that is their prerogative but they must be made aware that doing so has no foundation or basis in science. But what has happened is that at a time when we need to get rid of divisions in society, the likes of GMB are creating more. Joggers not wearing masks now are at risk of being labelled “uncaring” or “reckless”.

Trish Greenhalgh likely means well in her endeavours and whilst I don’t share her quite radical views of masks, and NPI’s in general, I respect her right to hold those views. But I don’t support her right to go on National TV and spout misinformation and fan the flames of divisions with uninformed opinions and outright pseudoscience. Claiming that an infectious person jogging past can transmit the virus to you is a claim that is without any scientific or evidential basis at all. It’s hysterical and should be referred to as an example of just how irrational otherwise educated and sensible people become when fear takes root within them.

We need to return to science and move away from the claims of social media experts being used in shaping perceptions. Science is where theories are tested and concepts challenged. That doesn’t happen on shows like Good Morning Britain as Piers Morgan and critical thought cannot coexist in the same room.

SDLP Leader Could Eastwood took to the Nolan Show Live to demand that unvaccinated care-home staff should be fired and that young people should be coerced into taking the Covid injection or else find themselves ostracised from sections of society. He blamed the spread of Covid on the unjabbed saying that it was "a pandemic of the unvaccinated".
END_OF_DOCUMENT_TOKEN_TO_BE_REPLACED

Northern Ireland is experiencing a serious issue of non-COVID excess deaths that neither the Department of Health or its media wishes to investigate. Therefore, Alan Chestnutt decides that he'll do their job for them.
END_OF_DOCUMENT_TOKEN_TO_BE_REPLACED

In the first of this 3-part series, we hear the stories of three brave residents of Northern Ireland who lost loved ones in care homes during different periods of the COVID-19 pandemic. With these first-hand accounts, you will learn that…
END_OF_DOCUMENT_TOKEN_TO_BE_REPLACED

NISRA publish weekly death statistics and also provide a summary which includes excess deaths based on a 5-year average, 2017-2021. However, our analysis will compare this to the 5-year average of 2015-2019, as these were the most recent ‘normal’ years…
END_OF_DOCUMENT_TOKEN_TO_BE_REPLACED

Naomi Long argues against the use of the 5-year-average as an acceptable measurement gauge but only for assessing non-COVID excess deaths in Northern Ireland. We take a closer look at why this may be!
END_OF_DOCUMENT_TOKEN_TO_BE_REPLACED