Freedom of Information requests, and now Northern Ireland’s First Minister confirm no evidence has been presented for Vaccine Passports. 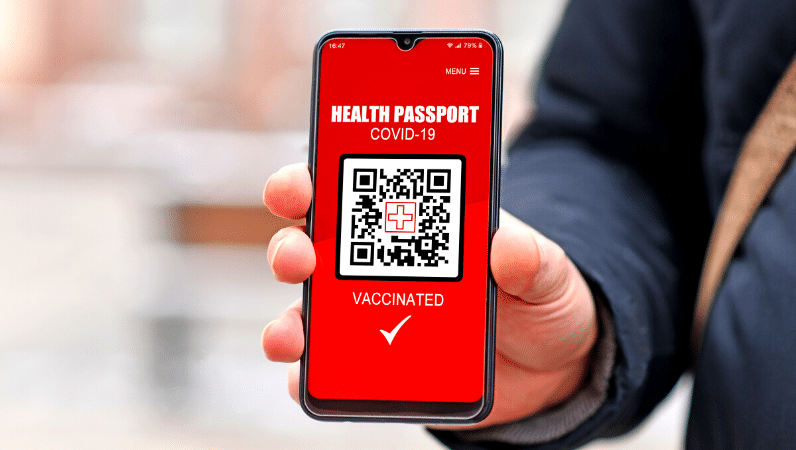 On Monday of this week, we reported on our attempts to obtain evidence for the claimed benefits of Covid “vaccine passports” being introduced in Northern Ireland, in response to a co-ordinated effort by politicians, most notably the SDLP and Alliance Party, the mainstream media and the British Medical Association Northern Ireland. This wasn’t the first time, as we reported back in September.

Shortly after the first attempt, The Alliance Party leader, and Justice Minister, Naomi Long claimed on twitter that evidence for a Covid passport scheme had been presented to The Executive, and that she was in favour of it being made available to the public. As no evidence appeared to be forthcoming, we submitted Freedom of Information requests to both The Executive and the Department of Health.

You can read the full details of the FOI exchanges in our previous article, but in short, The Executive claimed not to possess the information and referred us to the Department of Health. After several exchanges with the Department of Health, they claimed not to hold the information we were requesting which was asking for the expected impact or forecasts on transmission, cases, hospitalisations and deaths, should vaccine passports be introduced.

Two days later, the case was presented to The Executive to make Covid Certification checks mandatory, and it was voted in favour by 6 votes to 4. The SDLP, Alliance Party and UUP all in favour, while the DUP members voted against.

We immediately submitted Freedom of Information requests to the Executive to request any and all information and evidence that was used in the decision making process, which will likely take a number of weeks to come through, should they choose to provide it.

However, in the meantime, information has been sent through to Citizen Journos, which gives an indication of the level of evidence that was presented to The Executive on Wednesday to argue in favour of the vaccine passports.

Understandably, there are major concerns regarding the imposition of vaccine passports amongst the public, resulting in people contacting MLAs before and after Wednesday’s vote.

One of those is Keith Lonsdale, Deputy Chairman of the Alliance for Democracy and Freedom party, who contacted the First Minister, Paul Givan following the results of Wednesday’s vote. Mr Lonsdale shared the response he received back from the First Minister with us, which gives us some insight into what was presented to The Executive on Wednesday ahead of the vote.

Here are some extracts from Mr Givan’s response:

We believe that steps should be taken which will have the greatest impact on our hospitals and the pressures facing our front-line medical staff.

Mr Givan’s view on what the measures implemented should be based on.

This suggests there has been modelling presented in relation to the impact a high uptake booster programme will achieve.

Instead of focusing on a divisive distraction the Executive should be discussing why 80% of people eligible for the booster jab are unable to get it and why hundreds of people are medically fit to leave hospital cannot be discharged because there are no care packages available.  Furthermore, proposals to assist GPs enable greater access to their services to reduce pressure on Hospital Emergency Departments should also be a priority.

Here, Mr Givan highlights other areas which are creating significant pressures on the health service, which point to poor management – not necessarily attributed to Covid.

This is very important. No assessments of effectiveness, economic, equality or human rights. This means no evidence was presented.

This raises a big question, why would 6 out 10 ministers (or 4 out 5 parties) vote in favour of mandatory covid certification when no evidence was presented?

More information we have gathered has come from a member of our team, who quickly submitted a Freedom of Information Request to the Department of Health to obtain a copy of the presentation delivered to The Executive in advance of the vote. This was responded to earlier today, as the presentations are now available online:

You can read the presentations in full, and you’ll find that it contains no evidence of what the impact of mandatory covid certification will have. In fact, this is the only paragraph in which it is mentioned:

Evidence suggests that adherence to guidelines by the public is declining and that there has been very low uptake of COVID certification on a voluntary basis by the hospitality sector. Immediate measures are required to increase adherence to continued mitigations, including use of face coverings, work from home, outdoor meetings, ventilation and limiting contacts. It is unlikely that this will be sufficient to reduce Rt to less than 1 unless there is also widespread use of COVID certification across higher risk settings.

So, there’s the claim that the covid certificates will help reduce the R number, but again no evidence.

Further on in the presentation an interesting paragraph is included:

ROI now has the highest reported incidence across the common travel area, despite less testing than NI. If this trend continues, there will be some risk to NI levels as a result of cross border movements, in particular if restrictions in NI are less strict that in ROI. NI is likely to have the highest incidence in the UK later this week.

Mandatory covid certification has been in place in ROI for hospitality venues and entertainment events since 22nd July 2021. Yet here the Department of Health has admitted that ROI has the highest covid incidence in the common travel area with all those measures already in place! Note the comment regarding cross border movements? Perhaps it’s been noticed that residents from ROI have been regularly visiting our NI hospitality venues since the summer – could that be a motivation to make the covid certification mandatory?

It is also worth noting that ROI has introduced further restrictions on hospitality in recent days, which were already restricted to fully vaccinated customers, indicating their faith in the scheme is waning. Yet, 4 of the 5 parties in The Executive voted to introduce them anyway.

Another member of the public has reached out to us following communications earlier this week with an MLA, this time Mike Nesbitt of the UUP, MLA for Strangford. Mr Nesbitt responded in detail to try and address the concerns the citizen, who is also a business owner in hospitality, raised regarding mandatory covid certification. Let’s see how he addressed them.

Believing he had provided his constituent with the evidence to justify the implementation of covid certification, Mr Nesbitt concluded his email with this:

“Again I thank you for your email but I do want to assure you that there is clear evidence that a mandatory COVID-19 certificate scheme is effective, as is the hugely important booster campaign.”

So, what evidence did he reference?

Mr Nesbitt then cites and includes a study from Oxford University as evidence of benefit. This is interesting. It can be viewed in full here.

However, it does point to increased vaccine uptake and lower rates of infections. They include the following graph which illustrates this:

All countries used in the study except for Israel do show a reduction in cases following the introduction of covid certificates. Israel had cases continue to rise sharply throughout August, before beginning to drop in September.

The graph runs up to 28 September 2021, how have things been going in terms of cases since then? For this, we used Our World In Data to extend the cases graph to make it up to date:

Would the study have come to the same conclusion regarding transmission if their graph looked like this? All the countries have cases on the rise, aside from Israel, which was also the exception in the Oxford study, which could suggest the virus will work under its own terms regardless of the interventions used. Denmark, Germany and Switzerland all have high case rates which have risen sharply quite recently. France and Italy are relatively low but are now on the rise too.

Therefore, the Oxford Study cited in the context Mr Nesbitt is using, as evidence for vaccine uptake AND reducing transmission, is out of date and the assumptions regarding transmission are wrong. This study should not be used in decision-making by any MLA, or The Executive when it comes to voting for the introduction of mandatory covid certification here in Northern Ireland.

Four of the five parties in The Executive have been openly campaigning for the passports yet there is no evidence provided to show it will be beneficial as a public health tool.

The First Minister, Paul Givan, has confirmed no evidence has been presented to The Executive, situations in other countries that have introduced passports have shown them to be a failure and MLAs are using out of date and incorrect information when communicating with the public to support their arguments.

We have already passed several steps towards mandatory covid certification and dates for their implementation have been agreed, yet there is no medical or scientific evidence to support them.

We therefore conclude that the introduction of vaccine passports is to coerce, bully and pressure members of the public who have for whatever reason chosen not to be vaccinated.

The BBC's William Crawley likes to position himself as a gatekeeper for the truth - someone who is at the forefront of tackling whatever he deems to be "misinformation". But William quite often spreads lies and disinformation himself. So who fact-checks him? Well, we do!
END_OF_DOCUMENT_TOKEN_TO_BE_REPLACED

Trish Greenhalgh is a mask zealot who has chosen the face mask debate as the rock on which her long academic career could well perish. We expose yet another instance of her making up stories to try and prove her narrative.
END_OF_DOCUMENT_TOKEN_TO_BE_REPLACED

As the unexplained numbers of excess deaths keeps rising in Northern Ireland, one MLA has worked hard to try and get the Department of Health to begin an investigation into what's causing these deaths. At every turn the DoH have frustrated Paul Frew's efforts and, as you'll see in this report, even sought to play down the number of deaths whilst also attempting to pass the responsibility to the Department of Finance knowing they weren't responsible for investigating such issues but it the DOH themselves that were responsible.
END_OF_DOCUMENT_TOKEN_TO_BE_REPLACED

SDLP Leader Could Eastwood took to the Nolan Show Live to demand that unvaccinated care-home staff should be fired and that young people should be coerced into taking the Covid injection or else find themselves ostracised from sections of society. He blamed the spread of Covid on the unjabbed saying that it was "a pandemic of the unvaccinated".
END_OF_DOCUMENT_TOKEN_TO_BE_REPLACED

Northern Ireland is experiencing a serious issue of non-COVID excess deaths that neither the Department of Health or its media wishes to investigate. Therefore, Alan Chestnutt decides that he'll do their job for them.
END_OF_DOCUMENT_TOKEN_TO_BE_REPLACED